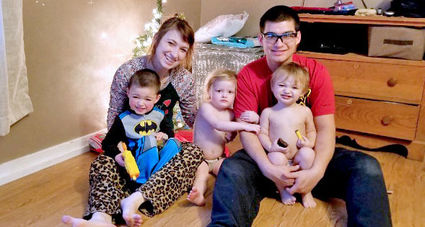 A fundraising dinner and raffle is planned for March 22 in Dayton, to help raise money for Danica and Michael Gatlin while their youngest child, Chayton, undergoes cancer treatment. (L to r) Mason, Danica, Ava, Michael, Chayton.

DAYTON – Michael and Danica Gatlin are still reeling after being blindsided by one those curveballs that life can lob out of nowhere.

The parents were originally told their almost two-year-old, Chayton, was suffering from a swollen gland. When it hadn't subsided after four weeks, they took the toddler to the emergency room on Jan. 23. The response was not what they expected.

Doctors immediately performed scans and, two hours later, Danica and Chayton were LifeFlighted to Seattle where Chayton received more tests, including a spinal lumbar tap. The next day, he was officially diagnosed wi...