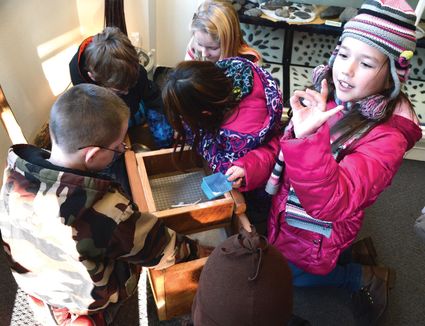 Karina Salguero (r), a Dayton Elementary second grader, has discovered buried treasure in the interactive sandbox at the Palus Museum in downtown Dayton. The second and third graders from Dayton visited the museum on Monday as a culminating activity for their study of Native Americans. The museum showcases artifacts from the Palouse people, who were the earliest settlers of Columbia County. Here the children sift for items such as beads, arrow heads, and bones. In other exhibits, the studentslearned how to start a fire with flint and steel, felt the pelts of numerous native animals, and tasted wild nuts and berries that the natives would have eaten.