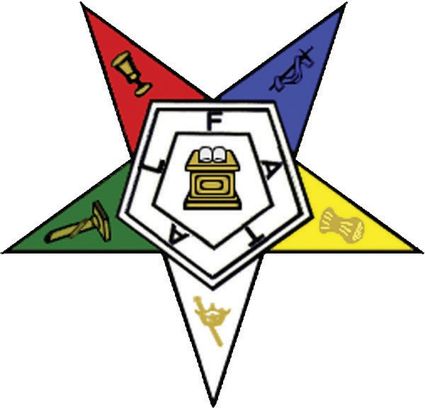 On Aug. 4, 1888, Right Worthy Associate Grand Patron J.E. Edmiston at the Masonic Lodge communicated the degree of the Order of Eastern Star to 26 members - 13 sisters and 13 brothers. Sixteen officers were installed with Frances Hudgin as Worthy Matron and Platt Preston as Worthy Patron.

Over the years, the Chapter has developed many committees and carried out many projects. The Bylaw and Finance committees were set up in 1889 followed by the Reporting of Sickness or Distress Committee (now called the Sunshine Committee) in 1952.

The current lodge was dedicated in 1914 and the Chapter purchased the furnishings for the kitchen and dining halls. Among the budgeted item list for new furnishings were: 6 dining chairs $35, 8 dozen folding chairs $13.50 per dozen, 30-feet of brass curtain rod 10 cents per foot, small rocker $3.50, and a couch for $30.

On April 6, 1936 the Waitsburg Chapter was approved to sponsor an Order of Rainbow for Girls Advisory Board which was the beginning of Waitsburg's Rainbow Assembly #68, which is still active today.

Recent WHS graduates and Past Worthy Advisors Jessie Hopkins and Kendra Roberts were appointed to Rainbow Grand Offices this summer and will represent Washington and Idaho at state assemblies. Hopkins is the Grand Washington Flag Bearer and Roberts is Grand Religion and Grand Christian Flag Bearer.

"In the last twenty-five years, the Waitsburg Chapter #9 OES has been dedicated to Charity, Truth and Loving-kindness," said Wilson. "We continue to donate sweatpants and towels to the Shriner's Hospital, we support the Grand Worthy Matron's and Grand Worthy Patron's Projects plus the Grand Chapters Committees and money-making projects."

In 1998 the Masons purchased a chair lift and the chapter helped with the expense. They also helped funded carpeting and painting in 1999 and installed a sound system in 2012.

March 17 as Order of Eastern Star Day in Waitsburg. The Chapter uses the day to honor local groups, businesses and organizations by delivering cookies and certificates of thanks. Some of the previous recipients include the Waitsburg Ambulance Service and Fire Department, City Hall, the Waitsburg Clinic, Weller Library, the Historical Society, the City crew, Black Dog Animal Rescue and more.

Monday night's 125th anniversary celebration included an official visit from Worthy Grand Matron Mary Ann Fergusson and Worthy Grand Patron Jim Iverson. Festivities began at 6 p.m. with a dinner in the basement of the Presbyterian Church for approximately 70 guests. The meal was catered by Rita Brown and Rainbow Girls helped with service and clean-up.

At 7:30 p.m., guests moved to the Masonic Temple where Worthy Matron Marilyn Wilson and Worthy Patron Jack McCaw welcomed the attendees and Marilyn gave a brief history of the club. A style show of dresses worn by EOS members from 1976 - 2014 served as the evening's entertainment and was followed by refreshments.

"I'd like to thank our co-chairs for the 125th Anniversary Celebration, Nancy Otterson and Lenore Kromm, entertainment chairman Barbara Danforth and Tom Baker for making the programs," said Wilson. She closed her speech with the following thought, "The Heritage of the past is the seed that brings forth the harvest of the future." 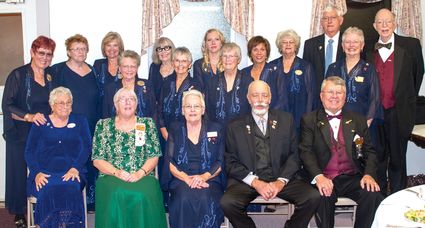