By Ken Graham
| The Times

Whoopemup Meadows to Grow in Phases 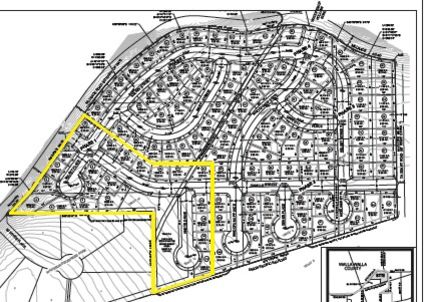 The preliminary design proposal for Whoopemup Meadows is shown above, with the outline of Phase I in yellow.

WAITSBURG - Infrastructure development for the first phase of Whoopemup Meadows, a new housing development in Waitsburg's northwest corner, will likely begin next year, its developers say. In an interview this week, Gene Warren, one of the principals of Warren Land Company, along with his wife, Mary, said, however, it's too early to speculate on a specific schedule for the development.

"There are many unknowns at this point," Warren said. "But next year we do plan to start Phase I."

The Warrens submitted a subdivision application to the City of Waitsburg last month for the planned 42-acre development. It would include 114 lots, most of which would be approximately 10,000 square feet, which is the city's minimum lot size.

The Waitsburg Planning Commission will hold a public hearing on the proposed development Monday evening at 7 p.m. at the Lions Club building at the Waitsburg Fairgrounds. The commission will also accept written comments on the application from the public through Friday.

After the hearing, the commission will make a recommendation to the Waitsburg City Council as to whether the application should be approved and what conditions, if any, should be placed on it. The council will make the final decision on approval and conditions.

Waitsburg City Manager Randy Hinchliffe told The Times this week that the planning commission's job is to make sure that the new development meets the requirements of all city codes and ordinances. He said public comments should address whether the development does or doesn't meet those requirements.

He also said that the city's engineer, Anderson Perry and Associates, has nearly completed its review of the application, and those findings will be presented at Monday's hearing as well.

Hinchliffe said the city likely has the capacity to handle the additional load the new development would put on its water and sewer facilities. "We have plenty of water," he said, "and the sewer plant could handle about 150 additional homes before we would need to look at expansion."

Besides city water and sewer, Whoopemup Meadows will also be served by Pacific Power. All utilities must be provided underground, by city code, Hinchliffe said. All streets in the development must also have curbs and sidewalks, by code. The development will also include a self-contained storm water system.

Warren Land Co. will construct all infrastructure, including installation of water, sewer, power and communications lines, and completion of streets, curbs and sidewalks. The city of Waitsburg will take over ownership of streets, sidewalks and city utilities upon completion of inspections, Hinchliffe said. The city will then be responsible for ongoing maintenance of that infrastructure.

Warren said that completion of the entire development could take as many as 20 years. "We're focused on Phase I right now, and we'll see how that goes," he said.

Phase I will include 21 lots in the southeast corner of the development. Warren said that infrastructure will be built for phase I, after which, those lots will be put on the market. Timing of development of additional phases will simply depend on market conditions he said.

Warren said, however, that he feels that development of new industrial projects in the area, particularly the Columbia Pulp plant near Starbuck and the new Portland General Electric wind energy facility, both in Columbia County, bode well for housing demand in the Touchet Valley. "We feel like our timing is good," he said.

Warren said he expects home values in Whoopemup Meadows to be in the $200,000 range, which, with current low interest rates, should be affordable for people in the new jobs that are being created.

When asked if the development would include covenants more restrictive than city codes, he said it definitely would, but he wasn't prepared to elaborate. "We're still working on the covenants," he said. In other new housing developments, restrictive covenants have included such things as limitations on outbuildings and restrictions on manufactured homes.

Warren also said he couldn't comment on whether his firm would construct some of the homes itself or sell all of the lots. "There are lots of builders in the area that will probably be interested," he said.

The Warrens bought the land for Whoopemup Meadows in 2011, and have been farming it since. The previous owners, Andy and Camille McElhinney, spent several years planning for the new development, including having the land rezoned residential, and having it annexed into the city. Annexation was approved by the city council in November 2007.

However, the local and national economies, including housing markets, weakened soon after, and the McElhinneys abandoned their plans.

Gene Warren is a Dayton native and is a lifelong Columbia County farmer. He and Mary also have many years experience in real estate sales and development in the area. Warren is also a member of the Port of Columbia Board of Commissioners.