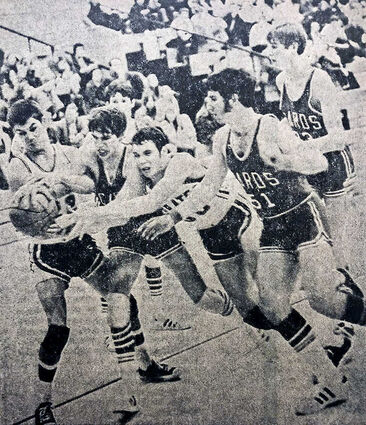 Several years ago, Waitsburg resident Leroy Cunningham had a vision for helping kids learn about business and have fun at the same time. He established Rural Youth Enrichment Services as a non-profit organization, and its board went through the lengthy process of obtaining 501c3 tax-exempt status. Current board president Anne Walsh of Waitsburg said that the group has gone through some ups and downs in the past few months, and Cunningham has left the group. But RYES is now establishing itself as a central hub to which other local groups providing youth activities can affiliate themselves for support.

Two local horses, owned and ridden by Walla Wallan Diane Royce, recently received top national honors from the United States Dressage Federation. At the USDF annual convention in New Orleans earlier this month, nine-year-old "Son of a Huh" was awarded first place of all thoroughbreds at second level in USDF's All-Breed Awards sponsored by Thoroughbred Horses for Sport and first place in their Vintage Cup program. For her accomplishments as rider in her age group, Royce ended up as top second level rider in the country in USDF's Horse of the Year Awards/Vintage cup. Additionally, out of the 1,461 horses who competed nationally at second level and the 264 who received a median score qualifying them for award consideration, "Son of a Huh" placed sixth in the United States in USDF's Horse of the Year Awards.

[Photo Caption] Concentration and effort are both reflected in the faces of these players as they struggle for possession of a rebound during the Pomeroy game. For the Cards are Guy McCaw, Pat Davis, and Val Woodworth, while Jon Kelly and Craig Bartels are in the action for the Pirates.

A week of freezing weather brought a lot of pleasure to the youngsters of Waitsburg who have discovered for themselves that "Lake Hermanson" at the Pictsweet Foods plant is an ideal ice skating rink.

The City Council announces to the general public of this city that on and after Feb. 1st, the big electric fire siren will be sounded for curfew at 8 o'clock instead of the bell as at present.

I.D. Casey was in town Saturday from his big chicken ranch near Attalia, Wash. I.D. says that prospects are bright for a wonderful business in day-old chicks this season. He is preparing to start his big incubators within a few weeks now.

A dance was held by the A. O. U. W. on Wednesday evening of last week. Music was furnished by a new five-piece orchestra composed of Frederica Kershaw, piano; Ralph Perrine, banjo; Eugene Austin, violin; Vaughn Abbey, saxophone; and Art Lafler, drums.

Two drunken Indians were shot near Wallula Monday evening by Mr. W. F. Delong. The Indians came to Mr. Delong's and ordered Mr. Delong and family to get off the place. Upon Mr. Delong refusing they became violent, and he shot two of them in self-defense, killing one instantly.

This week O. W. Pollard sold his interest in the Keiser-Honeycutt Co. The firm now reads Keiser and Honeycutt. The new firm will continue to keep its stock up to its present grade of excellence.