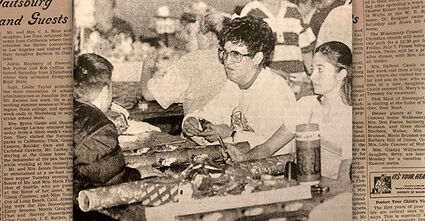 A standing room crowd packed the aisles of Waitsburg Hardware & Mercantile to listen to cowboy and western music, chat with neighbors and celebrate the Christmas season. The annual potluck and party put on by owners John and Marilyn Stelwagon drew around 200 community members this year between the hours of 11:00 a.m. and 1:00 p.m. Saturday. It all started five years ago when customers asked the Stelwagons if they were going to have a Christmas party. "What started out with just cookies and coffee, turned into a big potluck," Marilyn Stelwagon said. "Everybody who walks in the door brings something. That's just really how it got going. They just came and started singing Christmas carols one day. It was never something that was planned. It just evolved. And every year it's gotten to the point that we can count on the same people in the community coming in."

[Photo Caption] Volunteer Christmas gift wrappers Martha Kenney, left, and Kelly Thomas, visit with their young customer-of-the-moment during the third annual Kid's Shopping Night at Ye Towne Hall Monday. A large group of kids stormed the doors to shop among some 18 local vendors who offered a variety of gits priced under $10. The excited shoppers' parents sipped punch and nibbled cookies while waiting outside for their children to find that "just right" item to put under the tree.

Waitsburg's Cardinals ran into a crafty group of Columbia Coyotes last Friday night, and the sharp shooting bunch came out on top of the Redbirds by a 67-51 tab. Columbia teams have been noted for their long-shooting abilities, and this group under the direction of new coach Dick Hickman, were no exception. Top scorer for the Cards was Mike DeCoria, who potted a total of 12 goals and 4 free throws for a 28-point output. Columbia's defense resisted penetration, and many of Mike's shots were made from the 25-foot range. The Coyotes jumped to an early lead on the shooting of Steve Lee, Randy Reed and Ron Hink, Guy McCaw made the first bucket for the Cards, then DeCoria finished the quarter with 12 points. Score after 8 minutes of play was 21-14 Columbia.

Mr. and Mrs. H. F. Carl have moved here from Walla Walla. They have bought a small place on Preston Avenue where they plan to raise chickens.

Huntsville community Christmas tree was decorated Wednesday of last week by the Dayton PP&L lineman, thru the courtesy of the company.

The young people of the city have been enjoying some pretty good skating for these parts during the past week. The ice along the Touchet has reached the thickness of several inches and as there has been little snow, is pretty smooth.

The social afternoon of the Ladies Aid Society was held in the Christian Church parlors Thursday afternoon. A pleasant social time was enjoyed while busy with their needlework. Refreshments consisting of tea, cake and fruit salad were served by Mrs. George Freeman, Mrs. Hollis Conover and Mrs. Walter Price.

Vaughn Abbey, elder son of Mr. and Mrs. Oscar Abbey arrived home Monday after completing his two years as a U.S. Marine. He was a member of the band and most of the time was spent in Hawaii and at Mare Island, California.

Frank Moore brought a bunch of persimmons to the office last Saturday which he took from a large tree on S. H. Erwin's place near Prescott. We see no reason why they should not do well in this state.

A very pleasant surprise party was given at the country residence of G. W. Loundagin on last Saturday evening in honor of Pete Loundagin and wife. About forty guests were present. Later in the evening a tempting lunch was served. All report an exceptionally pleasant time.