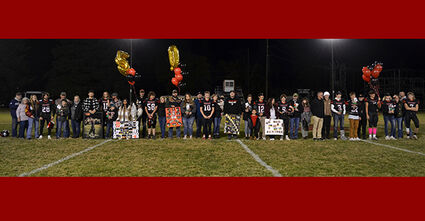 DW COMBINE-Five Wolfpack seniors played in their last game Friday, October 28; four seniors watched from the sidelines due to season-ending injuries.  Before kickoff, nine seniors and their families were recognized. DW lost to the league champs Riverview 35-0 and ended their season with a 6-3 record.

Head Coach Troy Larsen had a solid group of seniors who led with actions on and off the field. Being in the playoff hunt made for a fun season.

Fourth-year starters were Monte Pettichord and Hudson Reser, both great role models. Preston Hansen was an emotional leader in his first year at DW;...