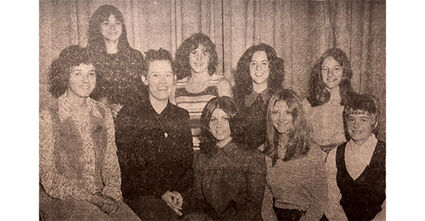 Coming off of two wins against Waitsburg-Prescott on Oct. 16 and DeSales on Oct. 18, the Dayton volleyball team was poised for attack on its senior night against the Walla Walla Valley Academy last Tuesday. However, the Bulldogs fell in a nail-biting finish after five sets against the WWVA Knights Tuesday. The game began by honoring Dayton seniors Jessica Tate and McKayla Bickelhaupt. The Bulldogs opening the first set keeping close to the Knight's scores. The score was close until the Knights took off with a 10-point run, leaving the Bulldogs to scramble to gain points.

Waitsburg Cross Country coach Denise Winnett was ecstatic following the excellent showing her team enjoyed at a meet last Friday in Pomeroy. All six Cardinal competitors improved upon their personal best times as the team prepared for the District meet this Saturday. The Cardinals will travel to Cle Elum for the combined District 5-7-9 Cross Country meet Saturday. Boys' varsity begins at 12:30 p.m. and the girls' varsity at 1 p.m. on the relatively flat, 3.1-mile course. Competition at district will include B, A, and AA schools, Winnett said. To qualify for state in Pasco Nov. 8, Abbey must finish among the first fifteen girls and the boys must be among the first 30 finishers. "We had one of our best meets as a team last Friday at Pomeroy," Winnett commented. "Everyone finished with a good kick, sprinting at the end to move up one position in finishing."

Coppei Avenue will be repaired in the spring, according to a State Highway engineer who visited Waitsburg this week and talked to councilmen regarding the repair work.

Mrs. Henry Roberts returned Thursday morning from Seattle where she attended a meeting of the state committee of United Church Overseas Relief sponsored by the Council of Churches.

W.A. Milller moved this week to Dayton after selling the Headquarters to C.R. DeVaney of Farmington.

Apple harvest at the Waitsburg Fruit Warehouse closed last week with a total output of 24 cars of packed apples. This represents just about one-third of a normal crop.

The Girls' Reserve Club of Central School, with their advisor and teacher, were entertained at a Halloween party at the home of Mr. and Mrs. S. H. Cutting Monday evening.

W.B. Shaffer is making extensive improvements to his residence property on Fourth Street by enlarging the reading porch and by building a large sleeping porch just above it. Edw. Buroker is doing the work.

The Preston-Parton Milling Co. are thinking of putting in a small electric plant for lighting their mill.

L.T. Parker has leased the streetcar lines in Walla Walla. His son James is operator. And now no doubt, Tom will soon be a millionaire several times over.

In Dayton on Thursday evening, Oct. 28, 1897, a short but impressive ceremony was performed which united in the holy bonds of wedlock Schuyler Arnold and Miss Minnie Blackard, both of this city. Rev. Barton Z. Riggs of this city, tied the knot and tied it tight.