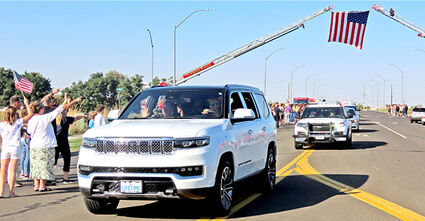 Trooper Atckinson was welcomed by supporters as he was driven home to Walla Walla from Harborview Hospital in Seattle. Well wishers along the route included members of Walla Walla, Yakima, and Waitburg law enforcement and emergency services.

Atkinson, a five-year veteran of WSP, was shot in the face and hand while on duty on September 22. He drove himself to the local hospital where he was transferred to Harborview Medical Center in Seattle. Atkinson stays positive and lives by the State Patrol motto, "Service with Humility" and the motto at the Academy, "I will not quit, I will not die, I will survive".