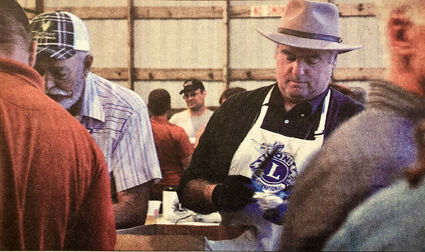 A good-sized crowd numbering 946 attended the 37th Annual Commercial Club Salmon Bake last Thursday. Attendance was about 100 lower than 1996, according to Ivan Keve of the Commercial Club. The event should net the organization about $4,000 this year, Keve said, down somewhat from last year. He said uncertain weather probably hurt attendance. The brisk evening was not unpleasant, yet weather worries may have kept some at home this year. Beer, pop and wine sales were about $300 less that last year, and fish sales were about equal to last year’s. Keve didn’t have all expenses in as of early this week. He hopes to have details at the second meeting in October.

Mrs. Elsie Moore Wise of Honolulu entertained Chapter 13, Daughters of the Pioneers of Washington at her country home southwest of Dayton Thursday afternoon at a salad luncheon assisted by Mrs. Luella Brill. Guests for the occasion were Mrs. Glen Cecil and Miss Faye Norris. Mrs. Gilbert Blue, president presided over business. It was told that Miss Nicolette Dague of Grandview whose antecedents arrived in Oregon Territory in 1852 and Washington Territory in the 1870s was presented the annual scholarship at the annual convention in May. It was voted to present a monetary memorial to the Dayton City Library in memory of long-time member, Mrs. May Israel.

C. E. DeVaney of Farmington has purchased the Headquarters in Waitsburg, formerly operated by Walter A. Miller. Mr. DeVaney will take over the business Oct. 1.

The Pasco-Kennewick bridge will open for traffic on October 7th.

H. D. Conover was severely bruised and one leg and the ankle of the other leg seriously mashed when he fell under a loaded wagon Wednesday afternoon.

E. A. Huntley of this city pled guilty to riding his motorcycle Saturday on the closed piece of paving on the state highway south of this city and was fined $10 and costs by Judge H. V. Grubbe, Tuesday.

A troop of calvary from Fort Walla Walla spent Monday night in this city. They were out for a week’s good time.

B. M. Kent this week sold his entire ranch near Bolles Junction to Marcus Zuger. Mr. Kent will give up farming and go into the stock raising business.

J. D. Woodworth, of Alto, brought part of a Russian Thistle plant to this office yesterday afternoon. Mr. Woodworth says there are quite large patches of it through the county, but farmers don’t know what it is. We would like to have farmers especially to drop in and see how it looks.