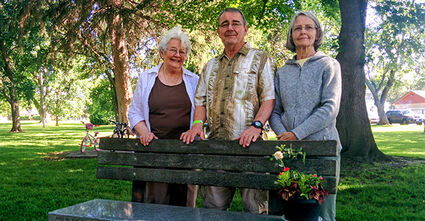 WAITSBURG-This year, the Waitsburg Historical Society has selected the Albert Land Family as the 2022 Pioneers of the Year. Albert Land's three surviving children, Elaine Reese, Joan Miller, and Tom Land will be at the Waitsburg Pioneer Fall Festival on Sunday, Sept. 18 to receive the honors.

Albert's grandfather, Edmund Land was born in England in 1823, and went on to travel the world. As his obituary noted, he "crossed the Atlantic Ocean four times and the Pacific Ocean twice." Living in New Zealand for many years, he then moved to Canada with his growing family, and eventually immigrated to the United States in 1883, settling in Butler County, Nebraska.

In March of 1902, Edmund moved to Waitsburg with his wife, Anne, and their sons Maurice and Arthur, settling on Sixth Street. After Maurice purchased property up Wilson Hollow and Jasper Mountain, he returned shortly to Nebraska to marry his bride Mary Catherine Buehrer. Maurice and Mary returned to Jasper Mountain to raise a family and were shortly joined by Mary's parents and siblings.

Back in Nebraska, word traveled about the plentiful "fruit basket" that the fertile soil surrounding Waitsburg provided. Shortly, the Hermanns family, who were the old Butler County neighbors of the Lands, also made the move to Waitsburg.

Maurice and Mary had five children, Violet Dumond, Albert, Carl, Leo, and Laura (Sally) Penner. The family moved from Wilson Hollow into town in a house off Garden Street when Violet was of school age. The property is still in the family. From 1909 to 1911 Maurice operated the M. H. Land Photo Studio on the east side of Main Street just south of the bridge. Many families throughout the area were photographed in the studio. Maurice also photographed the annual harvest crews who worked the lands all around Waitsburg. Maurice's large format Kodak Empire State #2 camera can be seen on display at the Bruce Museum.

After his career as a photographer, Maurice went on to operate a fuel and building supply business on the northwest corner of Preston and Coppei, where the current Ag-Link fueling station sits. Young Albert became a partner with his father in this business. Maurice Land passed in 1927, and his wife Mary passed in 1944.

Albert Land graduated from Waitsburg High School in 1924 and married Betty Hager Anderson of Dayton, in 1931. In 1937 he started his own business, the Land Construction Company, which he ran until his retirement in the 1970's. During his career he built and remodeled many area homes, constructed several structures at Camp Wooten, erected area grain elevators, and built the current Waitsburg Post Office.

Albert was deeply involved in Waitsburg civic life, serving on the city council from 1950 to 1961, and as mayor from 1961 to 1968. He was celebrated and honored by several community awards throughout his life. Albert Land passed away, surrounded by his family, in 1992 at the age of 86.

The children of Albert and Betty will be representing the Land family at the Pioneer Fall Festival. Daughter Elaine and her husband John Reese live in Walla Walla. Joan and husband Ron Miller live in Columbia Falls, Montana. Tom Land, an integral part of the Waitsburg Historical Society lives in Walla Walla.