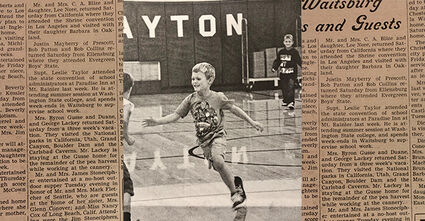 [Photo Caption] First grader Ryland Kiltz runs after a classmate during a game of freeze tag in the gym Tuesday on the first day back to school at Dayton Elementary School.

Waitsburg FFA and 4-H exhibitors captured top honors in fitting and showing and market classes during the Walla Walla Fair and Frontier Days which finished its five-day run Monday. Jane Conover, as the show’s Grand Champion All-Around Showman, gave the Waitsburg FFA Chapter its second consecutive win in that division. FFA swine showman Anne Bickelhaupt won last year. Three of the four individuals in the Fitting and Showing finals were from Waitsburg. In addition to Conover, it included Beth Abbey, who won the sheep division, and Rachel Lambert, who topped all swine showmen. Abbey was the Reserve Grand Champion All-Around Showman.

Terry Hiatt, Waitsburg High School graduate and the son of Mr. and Mrs. Shannon Hiatt of Walla Walla, finished his basic training in August at Fort Ord, Ca. as a member of the Special Forces-Green Berets. As a platoon leader, he graduated in third position in a class of five companies and was voted first runner-up as trainee of the session. He is presently in Fort Sam Houston, Tex. In medical training for a sixteen-week session followed by parachute training in Virginia. This will be followed by an additional intensive course in medical training to prepare him to become a Medex.

Glen Hofer and Bob Wilson have been making a tour of southeastern states during the past two weeks, driving through California and Texas, through Georgia and on to New York. They expect to return before college starts this fall.

Mrs. Carl Fisher is teaching this year in the Prescott High School.

Mr. and Mrs. Ray Peacock of Cathlamet, Wa. Have purchased the Plaza Theater from the Hanchetts and took over on Wednesday.

The band boys were treated to watermelon and cantaloupes at the conclusion of the band practice Tuesday night by Naomi Rebekah Lodge. The boys sure consumed a powerful lot of melon.

A daughter was born to Mr. and Mrs. Chas. Katteman of this city, August 23rd.

Miss Charlotte Kingman left Monday morning for Drum Station, 18 miles below Walla Walla, where she will teach school. She was accompanied by her nephew, Sammy Smith.

George Minnick left on Tuesday for Colfax to superintend the threshing of Minnick Bros. crop of wheat in that section of the country.

E. C. Mills this week resigned his position as Clerk of the school board. C. H. Kingman was appointed to fill the vacancy.