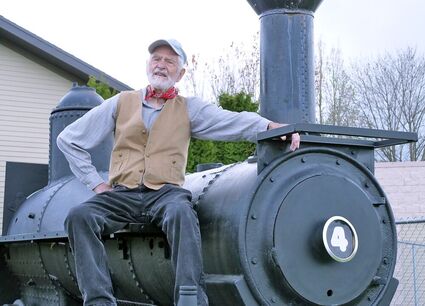 At age 20, Jack Cartwright emigrated to Nebraska in 1870. He already had years of experience working on railroads in the north of England, so he and his brother Ed became railroad men until 1877 when they headed west. They arrived in Walla Walla by a train headed to San Francisco and, within three days, went to work for Dorsey Baker on his brand new but already famous Walla Walla & Columbia River Railroad.

Cartwright became involved in every chapter of the launch and development of railroads in Eastern Washington for over 30 years. A lively conversationalist, he developed cordial relationships with Baker and Henri Villard, a railroad magnate, stock market wizard, and fellow immigrant who bought Baker's rail line.

Historians have written much about this pioneer railroad; however, Cartwright's detailed memories provide the only hands-on account of its birth and operation. Portrayed by retired Whitman College faculty member Clark Colahan, Cartwright will again spin vivid Casey Jones-type stories about a career on the rails, some reportedly made of wood and held together by rawhide. On September 4 at 2 pm, he will visit Fort Walla Walla Museum as a time traveler from 1912.

Fort Walla Walla Museum is located in Fort Walla Walla Park at 755 NE Myra Road. The Museum is open from 10 am-5 pm, seven days a week. Admission is $9 adults, $8 seniors/students, $4 children ages 6–12, and free for children under 6. Museum Members receive free admission all year long, and the beginning of the year is the best time to join. For more details, call 509-525-7703 or visit fwwm.org.