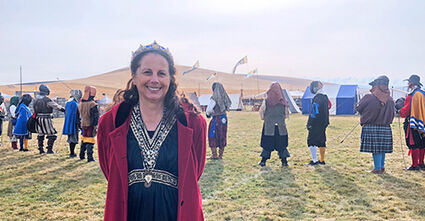 Dame Katherine of Akornebir (Kathy Carpenter of Waitsburg) at a past event.

With the tents and arenas set up at the city park, members of SCA welcome those interested in history, gallantry, and craft. There will be archery, armor-making and blacksmithing, calligraphy, and needlework. And of course competition in medieval fighting.

No pre-registration is required. The public is welcome. Anyone who would like to enter into a competition such as archery, the event fee of $15 may be submitted on site along with a signed waiver. Members get a $5 discount.