Around the Valley: With Karen Huwe

My sister won a lottery! A successful fishing trip, and I finished the month of July enjoying a parade in Oregon. 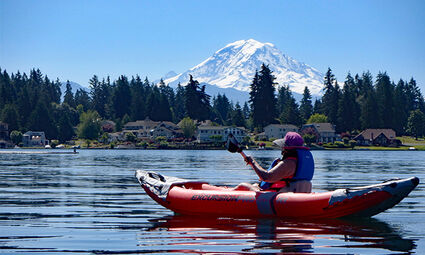 The lottery was not for money but a week's stay at beautiful Lake Tapp near Bonney Lake, Washington. My sisters, sans one, and I enjoyed a two-bedroom cabin with a kitchen and a deck overlooking the lake.

After stopping at the store to stock up on groceries, we enjoyed a boat ride compliments of an area resident and his family. At the lake, we saw geese, goslings, eagles, hot air balloons, and lots of people enjoying water sports. Mount Rainier is the backdrop of the lake, which made for awesome pictures while boating and later in the week during our kayak trips.

We took a day trip to Mount Rainier, and though unable to drive through areas under construction or see the Grove of the Patriarchs due to flooding damage, we did hike on the Sunrise trail.

On another day trip, we walked around the Museum of Glass in Tacoma, saw Victor Falls in Bonney Lake, and hiked to the Bubbling Geyser in Auburn.

From our cabin, it was a nice walk to Lake Tapps Park, a popular place with locals. It was a relaxing week of good food, good company, and a variety of games. If you ever go by Bonney Lake, be sure to check out Lake Tapps and Mount Rainier. You won't be disappointed.

Next was our trip to go salmon fishing. We traveled to Brewster, Wash., to spend the night before we were to be at the dock at 4:30 a.m. A fisherman at the hotel said to my sister the following day, "You must be going fishing as who else would get up before the crack of dawn."

After a ten-mile drive to Bridgeport, we took a six-mile boat ride to the mouth of the Okanogan with boat owner Dave, my sister's friend, and his two children. Fishing was good, with a limit on Sockeye salmon of four per person. Dave was a great guide, his young kids were a great help in the boat, and we all caught our limits.

This salmon trip was the second for me and my sisters and the first for Allen. It was an enjoyable time, and although there were about 100 boats in the area, it didn't feel crowded. We had a filet when we got home, and it sure was good. Find a guide and hook a big one.

Saturday, July 30th, Allen and I, along with our daughter and grandkids, took a trip to Irrigon, Oregon to check out the Irrigon Watermelon Festival. It is a yearly event with a lot of activities for young and old. It was a hot day, and after a quick walk through the park, we headed to Main Street for the parade. There was a huge crowd on one side of the street: the side with the shade. The parade lasted for about an hour, and the amount of candy handed out was massive. After the parade, we went back to the park for hamburgers, fries, and, of course, a big slice of watermelon. The park was packed with numerous vendors, some with free giveaways. There was a band, entertainment, bingo, kids' games, a softball tournament, and a car show. There was a lot to do at the Watermelon Festival. Be sure to check it out in July 2023.

A lottery, salmon, and a parade in July. What will August bring?