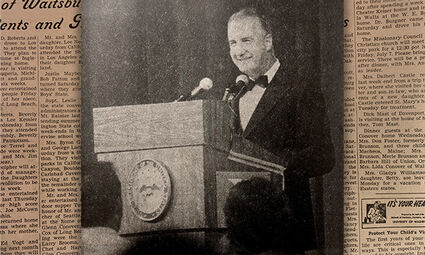 While amber waves of grain may be a nice song lyric, they are often not the nicest object to stare at for an entire 13-hour workday. Veteran harvest employee Zach Beasley is more than familiar with endless fields of wheat. This summer, Beasley will be working his fifth harvest season for Waitsburg wheat farmer Rusty Lyons. Beasley, a senior mechanical engineering student at Washington State University, said while the wheat can get monotonous, he enjoys the crew members he worked with and the money he makes working for Lyons helps put him through college. He started the job in high school when teacher Jim Leid suggested the opportunity to him.

Touchet Valley Grain Growers manager John Egli reported this week that the grain is really “shelling out” this year, and that from all reports this should be a record harvest. Most everyone in the area began harvest this week, with promises of record yields. Some of the ground near the Grain Growers office, which normally yields 35 bushels to the acre, has filled the hoppers with some 77-bushel yields. The Grain Gowers usually plan to finish up harvest before Labor Day, and Egli allowed that it would be very close this year. “With the heavier yields, we just may have to run a few extra days,” Egli said.

[Photo Caption] The Times photographer was on hand in Portland last Saturday night when Vice-President Spiro Agnew appeared before the National Newspaper Association convention. The shot was taken with a telephoto lens because the Secret Service does not allow any closeups. Mr. Agnew was in understandably good spirits, having earlier in the day been accepted as running mate for Richard M. Nixon on the 1972 GOP national ticket.

Bob Segraves is taking over the management of the Union Service Center on Friday, Aug. 1. It has been operated for the past years by Rex Shelton and Ivan Shelley.

Twenty-five Daughters of Civil War Veterans met with Mrs. Elmer Stonecipher for an all-day meeting on July 23, enjoying a covered-dish luncheon and a social afternoon. Mrs. Stonecipher gave a travelogue of Eastern Palestine.

Mr. and Mrs. Leroy Todt and daughters Jerry and Jo, and Mr. and Mrs. King Witt and children Ann and Neil returned Thursday night from a five-day fishing trip on the North Fork of the Clearwater River in Idaho.

Bruce Brothers who are operating their stationary outifit this week on Emory Bruce’s wheat on the James Archer place northwest of this city, and a small fire Wednesday afternoon.

Waitsburg has completed her new jail and are being equipped with “all modern conveniences.” The foundation and floor is of reinforced concrete and the whole has been painted white.

A number of Waitsburgers have been into the mountains during the past week hunting for the elusive huckleberry. The crop is in short supply this year and it is hard work finding enough to pick.

Henry Ingalls, 71 years old, stacked straw from a thresher one day and a half last week, and at the conclusion was able to jump up and crack his heels together twice before alighting.

John Kinder, who owns a fine ranch north of this city, is threshing 500 acres of wheat which is averaging 47 bushels per acre.

The Preston Parton Milling Co. is running two flour wagons this week. They are shipping an immense amount of flour.