Drink up and chow down at Laht Neppur

Glen Bates is the man behind the grill at Waitsburg's popular brewery. 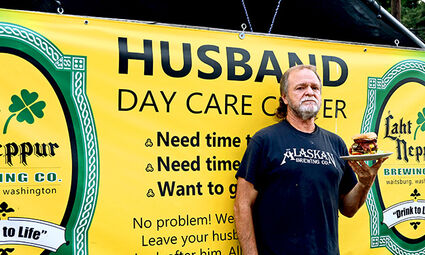 Glen Bates spends his summer serving up some of the best burgers in the area. He is much more comfortable behind the grill than in front of a camera.

WAITSBURG–This week, I sat down with Glen Bates as he shut down the outdoor grill for the night at Laht Neppur. We were interrupted by numerous variations of "Thanks, Glen!" and 'see ya' later.'

"I'm starting to get that a lot," my interviewee said. "Whether here, at the grocery store, or just driving down the street."

Laht Neppur Brewing Co. has served cold beers and warm cheers to Waitsburg and all its visitors for nearly 20 years. For six years, Bates has been grilling the perfect burgers, wraps, and chicken sandwiches to pair with the microbrews, wines, and house-made root beer.

Bates said he has been cooking since he was 14, in all manner of restaurants and casinos. He grew up in Nevada and returned to the Lake Topaz area after a six-year-run in the US Navy, where he also worked in kitchens.

Their son convinced Bates and his wife, Brenda, to move to Walla Walla, where they settled in Waitsburg, 12 years ago.

"Our son, who lived in Walla Walla, said 'you guys aren't doing much, you should move up here," Bates said. "So, we did. And I got a job at the White Stallion, and Brenda got a job at The General Store."

Bates worked at the beloved Waitsburg dive until it closed its doors in the late 2000s. He then hopped the county line to cook for the patients at Dayton General Hospital and the Booker Rest Home.

"I tried to be a doctor," joked Bates. "They just wouldn't let me."

After working at local restaurants, including the Whiskey C in its early days, Bates stepped up to help Laht Neppur owners Court and Katie Ruppenthal open their outdoor grill and patio.

"One day, I came in here, and we discussed this," Bates said, jutting a thumb at the covered grill space in the front of the brewery. "I said, 'well, who is going to cook?' Katie said, 'I'm not! You are.' And that was six years ago."

Bates shared that his first experience with an Imperial Pale Ale, or IPA for short, was at the former Whetstone Bar, in Waitsburg. They were serving one of Laht Neppur's IPAs, and it was good enough for Bates to turn away from mass-produced beers and learn to taste the finer qualities of small-batch brews.

The grill menu has grown to include seasonal specials and popcorn shrimp since he first started cooking under a pop-up tent. Now, he has a permanent space built from a reclaimed grain storage bin, complete with fryers, flattops, and plenty of cold storage for ingredients. He enjoys the freedom that comes along with being the grill master.

With his improved setup Bates said, "I can cook anything that I imagine." He has a few seasonal options that he looks forward to each year, starting with beer-battered asparagus, followed up by Walla Walla Sweet Onion rings. The asparagus has become increasingly popular, Bates said.

"And when the Walla Walla Sweets run out, we are done with onion rings!" he added.

Bates said that he really enjoys living and working in a small town. He works with friends and gets to interact with customers daily, something that he didn't get to do in his early career.

Laht Neppur Brewing Co. is still going strong with its wide selection of craft beers, ranging from a hoppy IPA to the burly Laughing Boy Stout. They continue to feature other Washington and Oregon beers, including a Huckleberry Pucker Shandy from Paradise Creek Brewing Co., in Pullman, Wash.

In addition to its peanut shells-on-the-floor relaxed and welcoming atmosphere and great beer on tap, Laht Neppur hosts a trivia night on the second Thursday of the month. There are prizes for winners and fun for all.

The outdoor grill is open from late spring through fall, with Bates saying that he cooks until it simply gets too cold to be outside. The grill is open for dinner Thursdays- Sundays, from 4:30 p.m. to 7:30(ish). Glen is also at the grill for lunch on Fridays-Sunday, from 12:00 p.m. to 2:30 p.m.