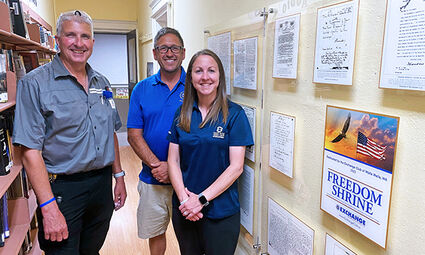 WAITSBURG- On June 30, 2022, the Exchange Club of Walla Walla donated and installed a 20-document acrylic Freedom Shrine to the Weller Public Library. Most known for its child-abuse prevention program, the National Exchange Club also works to promote pride in our country. The club's "Americanism" program was born after World War II and is still going strong.

As part of this program, local Exchange chapters install Freedom Shrines in their communities. These are often installed in universities, libraries, state capitals, airports, and other public places at no charge to the recipients.

The informative displays are impressively mounted images of important and historic American documents, including the Declaration of Independence, the Constitution of the United States, and the Gettysburg Address. These Shrines allow our Nation's youth and others to read, with their own eyes, the immortal words of inspired Americans who so decisively changed the course of history.

The Exchange Club of Walla Walla has previously donated and installed Freedom Shrines at Garrison Middle School and College Place High School. On a National Exchange Club level, thousands of shrines have been dedicated throughout the United States and Puerto Rico.

For more information about the Exchange Club of Walla Walla, please visit http://www.wwexchangeclub.org.