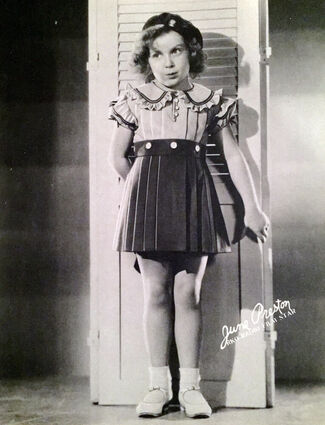 June Preston, one of the last remaining child actresses of Hollywood’s Golden Age turned world-renowned opera singer, has passed away in Montclair, NJ at age 93.

June Preston was born December 29, 1928, in Glendale, CA. She was discovered on the RKO studio lot at age three which resulted in two consecutive 7-year contracts, as well as working for various other movie studios throughout the years. Preston made her screen debut at age 4 as the daughter of Hilda Vaughn’s Mrs. Blewett in RKO’s Anne of Green Gables (1934), other movies included, Paramount’s (1940) Christmas in July, MGM’s (1937) Maytime, Paramount’s (1941) The Strawberry Blond, (1938) Our Gang Follies, to name a few.

Preston later went on to become a distinguished opera singer performing around the world. She was discovered at age 16 by Maestro Gustav Stern, a German conductor and vocal coach living in Seattle, WA who coached her through university. Within this time period, Preston performed with the Seattle Civic Light Opera Company with which Stern conducted several operettas featuring Preston in the lead, such as Camille in “The Merry Widow”, Marietta in “Naughty Marietta”, Micaëla in “Carmen”, Gianetta in “Gondoliers” “New Moon”, and “Der Fledermaus”, and also performed in the Metropolitan Theater, Seattle Civic Auditorium under the baton of Gustav Stern.

In 1949 she began touring abroad and in 1952, at the tender age of 24, Preston debuted with The Metropolitan Opera touring company on a South American tour in the leading role of ‘Mimi’ in La Boheme, singing opposite Metropolitan great, Jan Peerce. Over the next decade she would continue to perform around the world in the most prestigious opera houses and with symphony orchestras in the US, Europe, Central and South America. Preston was sought after for her beautiful and passionate voice possessing a five-octave range. She was deemed the “Golden Voice” by some of the most prestigious critics of the time.

In 1960 Preston returned to the US and made her debut at the St. Louis Symphony Hall as a guest star under the baton of Leopold Stokowski as the soloist singer for the thrilling last movement finale of Beethoven’s Ninth Symphony. Other guest stars included Isaac Stern, Leonard Bernstein, Leslie Chabay and Jean Madeira.

In 1961, while on her European tour, she met Saul Höuben, Belgian concert violinist and they married in 1963, soon after, she retired to raise her daughter. In 1996, Preston was inducted into the WSHS Hall of Fame in West Seattle where it all began and received a congratulatory note from George and Barbara Bush.

She is survived by her daughter, Sabrina and son-in-law John Pires, sister, Lita Preston-Chase, nieces, nephews, and dear friend Rose Jeffer and her family.

June Preston will be laid to rest in a private ceremony at Forest Lawn Memorial Park Cemetery, Hollywood Hills, California.