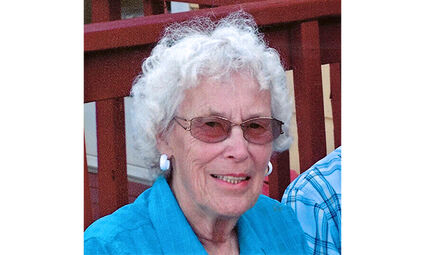 Dallas Yvonne Uthe, age 91, formerly of Presho, SD, passed away peacefully in her sleep on June 15, 2022, at Touchmark at All Saints in Sioux Falls, SD. Funeral services will be held at 11:00 am on Friday, June 24th at the Presho Methodist Church in Presho with a viewing one hour prior to the services. Burial will be at the Presho City Cemetery.

Dallas was born on June 2, 1931, to John & Irene (Harlan) Hulce in Vivian, SD. Dallas was raised on a ranch south of Vivian and attended grade school at Fair Valley Country School and graduated from Murdo High School in 1949.

Dallas was married to Burdette Huwe and had 3 children later in life married Harold Uthe on October 4, 1966; and raised 3 children. She lived in South Dakota most her life, but did live in Washington State and California for periods of her life. No matter where life lead her, she was strong and independent. Dallas was a self-taught musician and seamstress. She loved to play the piano, sew, quilt, crochet, play cards and games, read, can food, and attend sporting events. She also was an avid bowler and attended state bowling, both in South Dakota and Washington. Dallas loved entertaining and hosting parties and organizing events for the United Methodist Church ladies' group, American Legion Auxiliary, and the Blood Mobile.

Dallas got her cosmetology license and did hair for many years, along with being a mother, housewife, and waitress at Hutch's Café and Lounge.

She is proceeded in death by her parents, her husband Harold, her sister Meredith Huwe, her brother Harlan Hulce and several brothers and sisters-in-law.