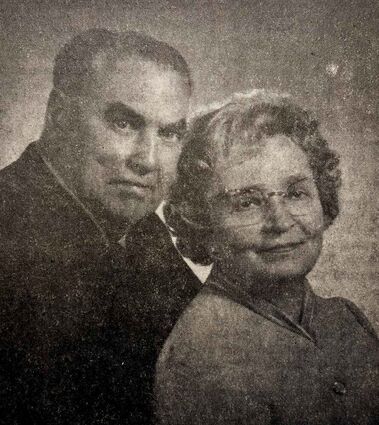 The 131st class to graduate from Dayton High School recessed from the gym and into the rest of their lives on Saturday with thousands of dollars in scholarship money in hand and an upbeat Kenny Chesney country song filling the room. Valedictorian Carter Currin said any bad moments in high school were ultimately tiny blips on the radar and many happier moments await the group. “We, the class of 2012, are ready to make that future bright,” salutatorian Keisha Phillips said.

The Waitsburg Lions Club honored Tailtwister Glynn Davis as its Lion of the Year. Outgoing president Val Woodworth presented Davis with the award at the club’s final meeting of the spring held at the Lions Cookshack at the DRS grounds. In accepting the honor, Davis expressed his heartfelt appreciation to the service club. Referring to the recent loss of his wife Donna to cancer, Davis said he “always knew that he had a group of guys behind him, supporting him. I will always remember that.”

[Photo Caption] The Empire Room of the Marcus Whitman Hotel is to be the scene of an open house, Sunday afternoon, June 18th honoring the 50th wedding anniversary of Mr. and Mrs. Jay McCaw of Prescott. The couple was married June 22, 1922 in Rosalia, Washington. Hosting the celebration to be held between 2 and 4 p.m. will be the couple’s children Mr. and Mrs. Russel Bergevin (Kathleen), and Mr. and Mrs. Jack McCaw. Also present will be the 7 grandchildren and 1 great grandchild. All friends and relatives are welcome to attend the festivities and the honorees request there be ‘no gifts please’.

Wilbur L. Hays, 18, seaman first class, son of Mr. and Mrs. Robert Hays, was initiated into the Royal Order of the Deep and the Imperial Domain of the Golden Dragon when he crossed the equator at the international dateline aboard the USS Antietam.

Mr. and Mrs. Marvin Langdon are the parents of a daughter born Saturday June 7. She has been named Judith Ann.

Marilyn Otterson has been chosen as a delegate of the Waitsburg Legion-Auxilary to attend Girl’s State in Bellingham leaving here Sunday.

The farm belonging to Mr. and Mrs. C. M. Taylor in Wilson Hallow was recently bought by R. D. Roberts and Albert Hollowell. The price paid was $135.00 per acre ‘tis said.

Miss Margaret Keve, daughter of Mr. and Mrs. Clemons Keve arrived home Saturday from Ellensburg where she has been attending the State Normal during the past year.

Marion Weatherford and son Clyde and granddaughter, Marybelle, came down from Dayton Friday to attend the picnic and race program.

Mary Saylor has gone to the Whiskey Creek neighborhood where she will stay for some time, assisting Mrs. Levi Dickinson in the care of the orphaned Robinson children.