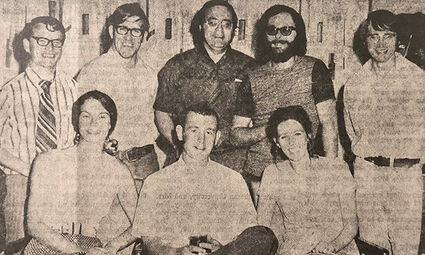 Eighty-one-year-old Booker Rest Home resident Louis Razzolini is no stranger to making his opinions known. But to Razzolini's fellow tenants he is more than just a friendly neighbor; he's a megaphone for people who often can't speak up for themselves. Razzolini, who is best known as just "Louie," is a representative to the Columbia County Health System's board of commissioners for the Booker Rest Home. He visits board meetings on the fourth Thursday of every month to bring up suggestions and complaints. "I keep my eyes and ears open," Razzolini said.

Saturday afternoon's torrential rainstorm seemed to clear the air for a very successful reunion and banquet of the Waitsburg High School Alumni Association, as more than 170 gathered for the event. Roy Leid called the classes to dinner, followed by the flag salute led by Bernard Donnelly, Tom Baker delivered the invocation. The class of '97 was welcomed by Marge Benson, '66, and the response by Del Benson, '97. Neil Henze, association president, presided over the meeting. Linda Stonecipher acted as recording secretary in the absence of Lynn Mantz-Powers.

Showers starting Sunday afternoon ended the long dry spell in this area which was causing the farmers much concern over their crops.

Mr. and Mrs. Harold Bloor are the parents of twins, a 5-pound boy and a 6-pound girl born Tuesday morning at St. Mary Hospital in Walla Walla.

By a vote of 35 to 0 Eureka voted last Saturday for the establishment of a fire protection district.

With a simple but impressive ritualistic ceremony, the American Legion on Memorial Day honored the memory of men of the community who lost their lives in three great wars.

The new fruit warehouse at Huntsville is now well under way. The concrete foundation is completed, and the lumber is on the ground.

The Sunday school children and teachers and pastor, R. O. Williams and wife of the Presbyterian Church went to Ellis Laidlaw's home near Dixie Friday for a picnic dinner and went to Lamb's grove where they enjoyed a splendid time.

The thoroughbreds and the harness horses at the track exceed in number any previous race meeting here. Forty-nine runners and fifteen trotters were listed Wednesday morning.

Married in Walla Walla, Monday, May 31, J. M. Stewart and Miss Melinda Zumwalt, both well and favorably known in this city. Mr. Stewart until recently has been employed in the J. H. James Barber Shop. Miss Zumwalt is a daughter of John Sampson, a prosperous farmer on the Coppei and she is held in the highest esteem by all who know her. We wish them happiness.

F. Petrie lost 100 chickens in the recent flood in Spring Valley. Mr. Wagoner lost a wagon, and his large barn was moved two feet on its foundation.