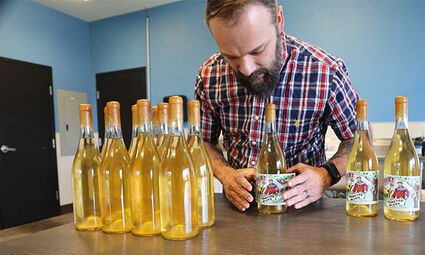 Mike Collins, owner and mead maker at Bard and Bee Meadery, labels a small batch of Honeyed Blues mead. This batch of berry-flavored beverages will hit a select couple of shelves in Walla Walla and Dayton.

Great stories often start with a man and his dog. In Dayton, it is the story of an entertainer and his winged pollinators making a run at an ancient art.

"I'm a farm kid," said Mike Collins, owner and mead maker at Bard and Bee Meadery. "I grew up, part in Milton Freewater, with my grandparents."

His grandparents owned Kessler's Catering, and while the business kept them plenty busy, there was much to be done at home on the nearly 400-acre farm. The planted acreage attracted local beekeepers, who would place hives in alfalfa, pumpkin, and wheat fields.

"It is customary, though not a neces...