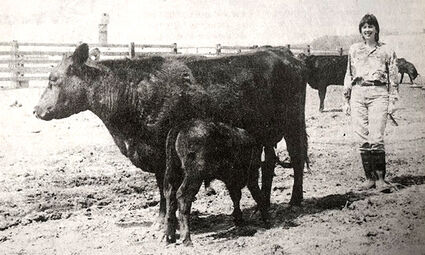 A youth choir that has brought many Touchet Valley teens together for a positive purpose is embarking on its last tour after 15 years. Pastor Mike and his wife Melissa Ferrians of the Waitsburg Christian Church have turned 15 groups of local teens into a singing sensation. The final tour of the Salt & Light Music Ministry embarks June 15 and ends with a home performance on June 21 at 7:30 p.m. at the Christian Church. “There’s something about kids and music and getting them up there having a good time singing,” Melissa said. “We’ve been doing it for 15 years. It was not an easy decision (to end it). The kids love it and we love the kids.”

[Photo Caption] Debbie Dickerson poses with the cow and bull calf that she rescued on March 15. Dickerson is wearing a pair of barn boots given her as a gift of gratitude from the calf’s owners, the McCaws and Withers, who also named the calf in honor of Dickerson: “MW Dickerson’s Rescue 656.”

Ralph Danielson, mounted on his horse “Smoky” will take charge of the parade activities again this year during the Days of Real Sport parade.

After pitching in hard luck most of the season Norman Woods toiled his way to a 3-2 margin over Touchet in a game played here Friday. Woods had the Touchet sluggers eating out of his hand all the way, coasting along with a 2-0 margin most of the way.

The Milton Nursery Co. of which Miller and Sons are proprietors has made a handsome present to our new Preston Park in the shape of 130 choice peony plants.

Miss Julia Ramseur, bookkeeper at the Hayes and Shuford hardware is “on the job” again since Monday after an illness of several weeks.

Miss Mary Dixons of this city, head of the business department at the local high school for several years past, was Monday named deputy county school superintendent, effective June 1st.

John Pettyjohn Jr. and family passed thru town Wednesday from Prescott on their way to the mountains to spend the summer. Mr. Pettyjohn will look after his cattle there.

J. D. Moore and son Howard returned from their ranch in the Paradise Valley last Friday. They report crops looking well in that country, but that grain is not nearly so far advanced as it is here.

Mrs. I. A. Wilson and children and Mrs. Sam Woods arrived in the city yesterday morning form Ontario, Canada, after nearly a year’s visit to relatives. We are glad to welcome them home.