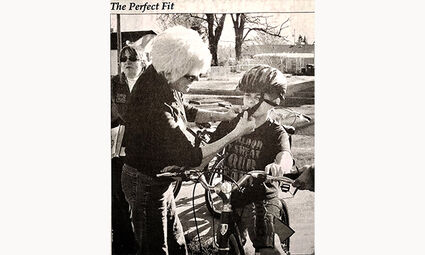 The Quilcene-Brinnon (Wash.) Schools Shellfish Science Club, advised by Charlie Baker, son of Tom and Anita Baker of Waitsburg and a 1971 graduate of Waitsburg High School, and who counts his daughter Molly and sons Tom and Daniel as members of the science club, has won a national award from the Environmental Protection Agency. EPA recognized the group for its involvement in beach and watershed enhancement, operating a self-sustaining shellfish business and providing environmental education for themselves. The club, which operates an ongoing, student-managed oyster-culture business, recently travelled to San Diego for regional competition and learned, while there, that it was the national winner for the region.

Jake Keve, native son of this area, has been named Parade Marshal for the 1972 edition of the Days of Real Sport Parade on Saturday morning, May 20. Jake was born on Jasper Mountain, the son of Mr. and Mrs. Clemens Keve. He attended Darden School, then farmed with his farther for about 5 years. In 1916 he married Marie Hermanns. The couple moved to Waitsburg on Armistice Day, 1918. Here in town, Jake did work with his own team and worked for the Adams golf course. He began working on the County road crew in 1924, was supervisor for 17 years and retired in 1959 after 35 years of service. Jake and his wife, who passed away in 1968, had three children – Andy, Ivan, and Jaunita (Long). Jake enjoys hunting, fishing, and riding, and he will head the parade on his favorite mare “Lady.”

Troop 36, Waitsburg, has completed an active and most successful week of Scouting. Tuesday evening of last week three members of the Board of Review had a busy session in preparing for a Court of Honor to be held Sunday, April 27 at the Camporee. Second class candidates reviewed were George Lloyd and Richard Pettichord. Bob Collins was a candidate for First class. Merit badge candidates were Neal Alexander, cooking; Fred Zuger, safety; David Dilts, cooking; Freddie Rankin, pioneering, safety, civics and pathfinding; Bill Zuger, pathfinding, automobiling and scholarship.

One hundred Years Ago

L. T. Parker last week received the appointment of guard in the jute mill at the penitentiary. This is not a surprise to Mr. Parker as he has been expecting the appointment. The position commands a good salary and is said to be the best guard position there.

J. W. Cold returned Wednesday morning from a trip to Heppner, Oregon where he purchased 6,000 head of sheep. They will be driven east immediately.

Henry Hauber and Art Mullinix caught three fine salmon last Saturday in the Touchet a short distance east of the city. The largest fish weighed 13 pounds and the three together weighed 28 pounds.