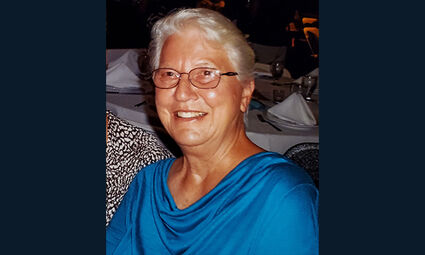 She was the 6th of 8 children, born to George Leonard and Deloris Mae (Wilson) Robbins. At nine months of age, the family left North Dakota for her father’s health, moving west to Quilcene, WA, where she grew up.

She met a handsome Navy sailor at a community dance and married Ronald George Douglas of Dayton, WA on February 12, 1955. They had four children and later, adopted the first of 22 foster children, they had under their care, son, Terry.

Janice was a homemaker, and gardener and took great joy in beautifying her homes. She worked seasonal jobs at the Green Giant, State Fisheries, and painting houses. She concluded her work history at Walla Walla Odd Fellows, as their baker and pie maker.

After she and Ron divorced, she moved back to Belfair, WA to care for her elderly parents. Eddie Adams stole her heart, a kind and caring man, they shared 20 glorious years of adventure, including snowbirding in Yuma, AZ, and trips to North Carolina, finally settling in Walla Walla, until his passing in 2010.

For her 75th Birthday in 2012, she was treated by her older daughters to a trip to Hawaii. Then later that year, to Alaska, where she experienced glaciers calving, a river float trip, scenic railway tour, guided bus tour to Denali National Park, Chena Hot Springs and even sat on Santa’s lap in North Pole, Alaska.

She married Roy Booth in LaGrande, Oregon in 2013, they enjoyed many fishing and hunting trips, until his passing in 2020. Janice moved to Spirit Lake, ID with the Snyders, prior to Roy’s passing, as health complications made caregiving for Roy, no longer possible, but they enjoyed daily chats on the phone.

Janice was a member of the Dayton Assembly of God Church, Walla Walla Valley Cowboy Church and Rathdrum Bible Church. She enjoyed her daily Bible reading, crocheting, flower gardening, and visiting with family and friends.

She was preceded in death by Ron, Eddie, and Roy, the men she loved. Her parents, Granddaughter Jennifer Elaine Kelso, Sisters Leona and Jewel and Brother Leonard.

Her graveside service will be at Dayton City Cemetery, May 21, 2022, at 1:00 p.m. Honoring Janice’s “pie baking” years, a “pie social” will be held, directly after, at the Delaney Building in Dayton.

In lieu of flowers, please bring your favorite pie or donate to the Union Gospel Mission, Women and Children, 196 W. Haycraft, Coeur d’ Alene, ID. 83815, in honor of her years of fostering children.