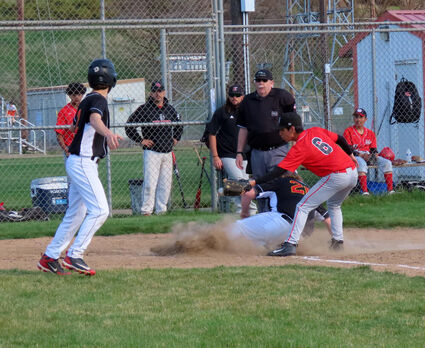 Evan Allen slides in to score against White Swan

DAYTON/WAITSBURG-DW and White Swan were tied 7-7 after three innings in their first game on Tuesday, March 29, in Waitsburg until the Cougars took the lead for good in the fifth inning. The Wolfpack was down by five runs going into the bottom of the seventh inning but only scored three runs, a triple by Rueben Yutzy.  In the 13-11 loss, Coach Crenshaw saw his players scatter 14 hits in the game. Yutzy and Klint Kuykendall had three hits each. Balian Walter and Keon Lindley had two hits each. The Wolfpack tore up the base paths with five players stealing at least two bases. Walter had four...