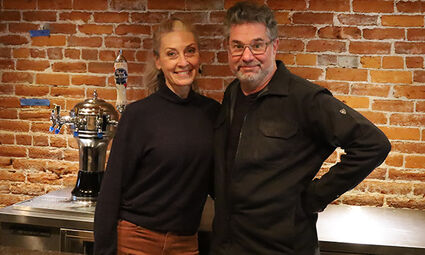 Waitsburg Commercial Club is holding its Annual Awards Dinner at the new restaurant on April 12.

WAITSBURG-A pizza maker and a Bloody Mary mix master walk into a bar. No joke, the bar was the empty Anchor Bar located in the American Legion, post 35, building on Main Street in Waitsburg.

Tom and Judy Bennett have embraced the building's history and want to incorporate the essence of the American Legion post and what it once was; good company and good food to their new business American 35.

The couple relocated to the Walla Walla Valley in 2016. Tom relocated for his work as a business management consultant. Judy had just opened her Portland Bloody Mary Mix company in Portland and began work as a physical therapist in Walla Walla.

You never know where life will lead you. The Bennetts took a trip to Italy that would lead them to a new culinary adventure.

"The short version of the story is that we went to Italy and encountered pizza in a way we had not seen. Our first impulse was to buy a place in downtown Walla Walla and do a pizza place."

Not able to find a suitable location, the Bennetts took advice from their son with restaurant experience and opened Fiasco Pizza as a food truck. And what a food truck it is. Working with a partner in South Carolina they created a beautiful wood fired pizza kitchen on the back of a vintage truck.

Fiasco focused on providing pizza to wineries in the Walla Walla valley and providing catering for private events. With a great crew, the food truck has built a loyal following who love wood-fired pizza.

Now the Bennetts bring their success in business and wood-fired pizza to the new building in Waitsburg. The new multi-functional space will allow the couple to expand their hospitality and provide a space for live music, parties, and family dining.

Residents have been watching as the building with the black and white flag transforms into the American 35. Two glass roll-up doors have been installed on the front of the building, bringing in light and the public's curiosity. Inside there have been big changes as well. The custom pizza oven has been delivered and installed, floors refinished, and a soapbox racer hung on the wall.

The Bennetts acknowledged that the building was the biggest challenge to opening. As they have been working on the space, they were committed to letting the building have a say in the project. After seeing the space empty for years, the city is excited for the doors to open.