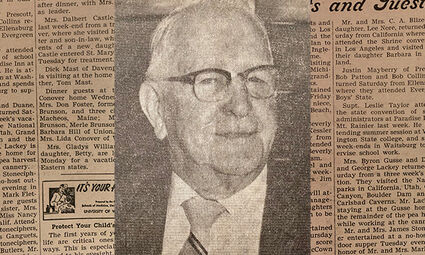 With the April 2 election right around the corner, Waitsburg residents Bart Baxter and Tiffany Laposi are throwing their hats in the ring for city council. Baxter who has lived in town for 7 years and owns Betty's Diner, has already completed one year on city council and made an unsuccessful bid for mayor in 2011. Laposi, who has lived in Waitsburg for 31 years, is a real property appraiser for Walla Walla County. She is a candidate in Waitsburg for the first time. Laposi has served on boards related to her profession and has some leadership experience. Being engaged to one another is not the only thing Laposi and Baxter have in common. They share the same goals for the city of Waitsburg – they both want to boost small businesses and tourism to make the city thrive.

Waitsburg Cardinal Track teams captured second (girls) and fourth (boys) at the season-opening meet at Clarkston Monday. An April 4 meet at Milton-Freewater is next on the schedule. The Waitsburg girls squad took second with 70 points on the strength of first-place finishes by Beth Abbey in the 3200-meter run, Kelly McCaw in the 100 m. dash, and the 400 m. relay (Wendy Jones, Cara Hulce, Kelly McCaw, Justina Ryckman) and 800 m. relays (Renee Scott, Cara Hulce, Kelly McCaw, Justina Ryckman). In fact, the 400 m. relay, anchored by speedster Kelly McCaw was won in 58.8 despite a dropped baton in the third hand-off.

[Photo Caption] Services for Sr. W. W. Day, who was stricken Saturday, were held Wednesday at the new Hubbard-Rogg chapel in Dayton. Dr. Day, active to the end, died in the small office he had maintained since his retirement from full practice in 1963. He also had continued to serve as county health officer. His death, two weeks short of his 86th anniversary, wrote the closing chapter of three generations of family medical practice here that extended over more than a century. His grandfather, also Dr. W. W. Day, opened Dayton's first medical practice in 1870.

Misses Velma Mock, Mary Hirsch, Barbara Blize and Joan Williamson have been home this week from U. of W. where they are having spring vacation.

Boy Scouts of Waitsburg report that three and three quarters tons of wastepaper were salvaged during the paper drive last Friday afternoon.

Charles (Bones) Preston, of Portland, formerly Waitsburg, and a son of the late W. G. Preston, narrowly escaped serious injury Saturday when his automobile was struck by an electric train.

W. J. Brockman last week sold his farm in Wilson Hollow to Ad Clark who with his family will take possession soon. Mr. Brockman says he does not know as yet what he will do but thinks he will not leave the vicinity of Waitsburg.

Neace-Hanger Co. this week started a branch store in Starbuck. They have fitted up a large building there and intend to keep in stock a full line of dry goods, clothing, boots and shoes. W. H. Fletcher will be placed in charge.

It is all very well for March to go out like a lion but we object to its taking thirty days to the performance.