A journey from music teacher to chief of police. 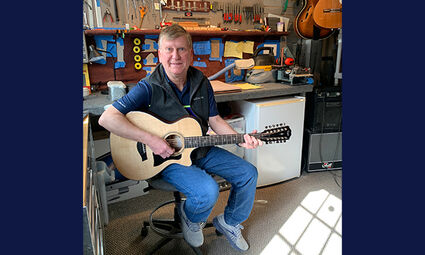 Recently I was introduced to a local police chief who is also a classically trained musician. Doug Boedigheimer is the Police Chief in Milton Freewater, Oregon. He makes the trip out to Orchard Street Studio in Waitsburg to bring his guitars to be set up by my brother-in-law, Joe Patrick. He also comes to talk music.

"The first guitar I brought him I had for 31 years, I didn't know about setups and guitar care. I was a music teacher, so this thing has been drug through everything. He turned that thing into something like the magic flute."

Entering high school, Boedigheimer planned on a career in law enforcement once he reached the age of 21. He learned about law enforcement through his uncle who was a Deputy Sheriff and a cousin who served as a Portland Police Bureau member.

That was before Claytene Vick; his high school music teacher saw promise in his voice and his enthusiasm for music. She helped develop his musicality, and he received a vocal scholarship to the Oregon College of Education in Monmouth, Oregon, now West Oregon University. He said he was thankful that Vick and a panel of professors at the college saw something in the voice of an 18-year-old boy worthy of their support.

Sadly, Vick died during his third year of teaching. She did live long enough to see him in college sing all the bass solos in Handel's Messiah. "It was very special," he said.

After graduating, he taught students in K-12 for six years in Oregon public schools. As school districts in the U.S. began significantly cutting funds for music programs, Boedigheimer decided to return to his earlier interest in law enforcement. He has been police chief in three Oregon locations. In October he will celebrate 27 years as an officer and a police chief.

Asked if there had been a big difference between his career as a music teacher and his role as police chief he answered, "Everyone thinks that, but once an educator always an educator. Being a police officer, and I consider myself a police officer first," he said, "police chief is an important-sounding title but that's not what my persona really is."

"Being a police officer in this cultural day and age is about education. More than just writing tickets in my opinion. It is more than just putting handcuffs on people, though that is a necessary part of it. Most people honestly just don't know what the law is until they are told about it," he said.

For Boedigheimer, "Education is an enjoyable component of being a law enforcement officer. So, you see in that way, it is not that dichotomous, being an educator and a police officer. Now what is odd, now that I have become known as the singing police chief everywhere I've been, now that is different sounding."

How does that play into his work? When asked how his interest in music overlaps with his job as police chief, he couldn't really draw a correlation. However, he has sung happy birthday to officers and encouraged others to follow their interest in music, including an officer with a banjo.

When I asked if his interest in music was helpful with the public, he said, "Maybe not outreach but I do think it is a connection I can use. When citizens find out I am musical, that is interesting to them. 'How can you be musical and be this mean police chief?'

"It opens a conversation and I become more than a figure with a badge, I become a human being that has a human interest a lot of people are interested in, whether you are a player, participant or listener.

He expresses his musical interests outside of work by performing and directing community choirs. He was the director of the Blue Mountain Chorus: Sweet Adelines in Walla Walla for a year. He has directed barbershop quartets and arranged music for classically oriented community groups in southeast Oregon. He feels his real forte is in the directing, conducting, composition and arrangement realm.

Though Boedigheimer went to college on a vocal scholarship and his wife Christine still loves his voice, he wonders why anyone else would want to listen to a croaking bass voice.

"Other than my barbershop quartet. They love the dynamic that our voices bring," he said.

He began teaching thinking he would focus on classical music, making his students little classical snobs like himself. He called it a certain classical arrogance. But, he said, "When you see people are not machines, you must change the way you teach to the way people learn. He came to realize that classical isn't the end of music, it is the beginning of understanding all music."

After engaging with different forms of music, he still applies his classical training, but he hears music differently now. For example, he loves singing in barbershop quartets, he started singing barbershop when he was 16 years old.

He is part of the barbershop quartet Stateline, where he is the resident arranger. He finds that his classical training helps him, and no longer gets in his way as it did when he first got his degree. He appreciates the group's comradery and trust in accepting his suggestions. He enjoys having musical input in a group as much as singing.

"Some people think any four guys, or four women can get together and make a quartet, that is really a misnomer. It takes a special set of tambors, to make that magical sound.

He said, "Stateline now has that sound. It also takes a certain set of personalities to be able to exist for two or three hours at a shot to work through the difficulties of acapella music or any kind of music. You just can't throw things together and expect magic to happen. Working together, teaches the team aspect of things."

The group competed in Seattle a few years ago, and though they didn't win any medals they did make the cut to perform in an evening show.

As a music teacher, he taught himself to play brass instruments, however, he always loved guitar. He is self-taught having had only one guitar class when he was 14.

Boedigheimer said that for him music is cathartic. Late nights are his time to get his guitar out and for introspection and reflection on his day.

This April, Boedigheimer will celebrate 15 years as Chief of Police in Milton Freewater, in October he will have 27 years in law enforcement. With the culture and atmosphere in law enforcement constantly changing, he is ready to leave on his own terms while he is in good standing and in good health.

"I am looking down the road to being a civilian and having friends again, this job does not always allow a lot of friends. Officers can have friends, chiefs not so much," he said.

Waitsburg is just down the road and Chief Boedigheimer has already started adding friends here.