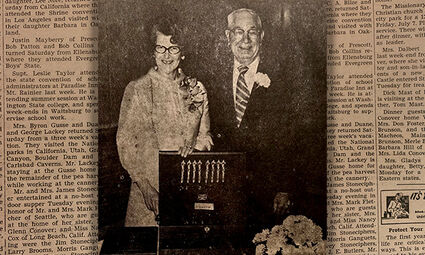 The Times is welcoming a new office administrator, Tawnya Richards, who will be in charge of accounting and paperwork to keep our operation running smoothly. Richards, 39, has resided in Waitsburg for the past 5 years. She has a background in office manager and supervisor positions in small businesses and hospitals and is the perfect person for the job.

Waitsburg’s Jim German was honored by Wine Enthusiast Magazine as Mixologist of the Month. The magazine highlighted his Main Street business, jimgermanbar, and touted the atmosphere in “One-of-a-Kind” Waitsburg.

Long-time Waitsburg attorney Vaughn Hubbard was recognized for his many years of community service with the Citizen of the Year Award, presented annually by the Waitsburg Commercial Club. Hubbard, now retired from active practice, was presented the honor at the club’s annual banquet, Tuesday, March 18, at Ye Towne Hall. “This has really surprised me,” Hubbard commented, “despite the fact that everyone in town knows everything.” Hubbard has been an involved citizen of Waitsburg for over 45 years. He started practicing law in 1951, according to the letter nominating Hubbard. In addition, he served as City Attorney from 1954 to 1991 and served as a Walla Walla County deputy prosecuting attorney in 1954-1955. He served four terms in the State House of Representatives, from 1965 to 1973.

[Photo Caption] Honored at the Green Giant banquet in Dayton upon his completion of 25 years with the company, is retiree Rol Baker, who, with his wife Theresa, proudly displays the plaque, the silverware and the table decorations presented to them.

St. Patrick’s Day was bright and sunny, with about 150 people taking long and admiring looks at the six-month old Zuger triplets who slept and awakened peacefully in a downtown shop window, for nearly an hour during the afternoon. The little girls, Margaret and Marie, wore white dresses, with matching pink bonnets and sweaters, and were presented with tiny green carnation corsages. Charles wore tiny green corduroys and T-shirt and had a green carnation boutonniere. Their mother also wore a lovely corsage of green carnations.

Co-hostesses for a stork shower given for Mrs. Lee Mantz Jr. at the country home of Mrs. Forrest Conover, Monday, March 17, were Mrs. C. A. Keiser, Mrs. Denney Neace, Mrs. Robert E. Bichsel, Mrs. E. Gene Ray and Mrs. Forrest Conover. Upon their arrival, each guest was given slips of paper and a pencil by Virginia Neace, and a guessing game of a “Baby’s Needs” proceeded. Prizes went to Mrs. Roy Leid and Mrs. Mettille.

C. A. Hales of this city, president of the Hales Sheep Co. reports that the company has 7,000 ewes at the Pasco stock yards with about 4,000 new lambs. Mr. Hales says that the season is proving a very successful one for lambs as the lamb crop is running about 120 percent.

Judge H. V. Grubbe has purchased the Mrs. D. L. Cox residence on Second street and as soon as the final papers are cleared up, expects to move there form his present home on East Sixth Street.

James Archer and son, Arden, spent a few days in Spokane this week. They also stopped at Pullman where they visited Mr. Archer’s son, Hesper who is attending school there.

One J. C. Hartman organized a good-sized writing class in this city on Monday evening of this week. The class meets Tuesday, Thursday and Friday evenings in the brown schoolhouse. Mr. Hartman is said to be a very fine penman.