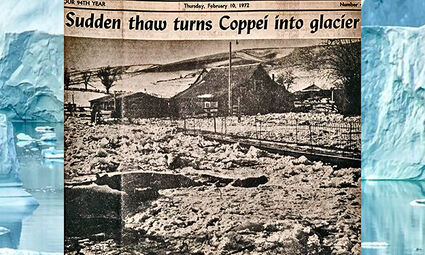 A generous gift from the family of the late Dale Hutchens means the staff members of the Booker Rest Home will have new equipment to make their work easier and more efficient. Hutchens, a former member of the board of directors for the Columbia County Health System from 1974 to 1987, passed away after spending more than 4 years at the Booker Rest Home. On his behalf, his family provided Booker with nearly $8,000.

The Waitsburg Cardinal girls basketball team iced its first-ever league championship with three season-ending wins. Waitsburg pulled another win from its sleeve Tuesday night on the local Maplewood, snatching a 57-54 win from the Asotin Panthers to preserve a six-game win streak, and the last win of the season. Pomeroy was no match for the Cards Saturday at home in a resounding 56-18 win and Friday’s meeting with Asotin there produced a 69-53 win.

[Photo Caption] Waitsburg has a new tourist attraction, but it isn’t very attractive to the homes neighboring Coppei Creek. When the weather warmed Monday morning, all the upstream ice broke loose and came to rest in the creek behind the homes of Larry Broom and M. L. Weaver. This small footbridge which afforded a crossing is now resting on the many tons of ice which blocked the stream just a few feet from the Coppei Avenue bridge south of town. We are calling it the Weaver-Broom Glacier.

Jack Roberts and Bill Zuger are both Life ranking Scouts and are on the final stretch for the Eagle award this spring. Tenderfoot Investiture was made to Dick Brunton, Bobby Henry, Larry LeVassuer, Ward Stevens and Dan Woods.

Library facilities will be available to the citizens of the Waitsburg vicinity starting this Saturday in the City Hall following the move from the Bruce house on Main Street.

Two sets of drawings and plans for a new grade school and gymnasium were presented to the Board of Directors for study at the Wednesday meeting. Directors and visitors studied the plans and future needs of the school.

Waitsburg is to have a Waitsburg Temple of Pythian Sisters – the ladies auxiliary of the Knights of Pythias.

Waitsburg is soon to have her first exclusive gasoline service station. W. A. Barnes of the Waitsburg Tire Shop and George Stimmel recently purchased property on Main and Third Streets from Harry Krutz of Seattle.

Last Saturday was the birthday of Mrs. J. H. Abbey and a number of her older friends learning this fact, took their baskets well-filled with lunch and surprised her by spending the day. Each one made a nice block for a quilt which was presented to her.

Sid Starrer’s barber shop is now lighted by electricity. The lights were put in last Saturday.