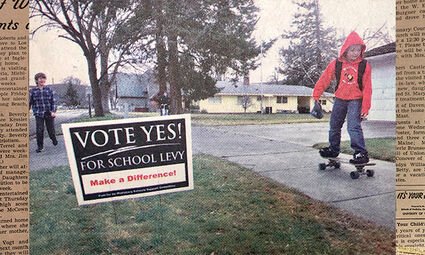 To say the City of Waitsburg is stumped by the future of the collapsed bunk house east of the McGregor plant is putting it mildly. No one came forward to put in a salvage bid for its materials. The fire district doesn't want to burn it as part of a training exercise because it contains hazardous materials. And now it appears the city is in violation of its own code by just letting it sit there. "It's been a worrisome issue," said Mayor Walt Gobel. "We may need to bite the bullet and get it squared away."

Citizens of Waitsburg sweated out another high-water incident last week as high temperatures and rain, after a period of chilly temperatures and snowfall, sent runoff rushing downstream. Weather forecasters on Wednesday called for unseasonally high temperatures in the higher elevations and around one inch of rain for the latter part of the week.

Jim Burres of Waitsburg was elected to head the Walla Walla Cattlemen's Association at the annual meeting held last Thursday in the Marcus Whitman Hotel. Jim, who has served as the organization's vice president, takes over the leadership from Joes Herres who has held the office for the past two years. Joe Chvatal was named vice president and Bill Stonecipher will serve as secretary. Bob Kibler will be the treasurer and Doug Warnock recording secretary. Jim Kibler and Bill Stonecipher will serve on the board of directors with Tom Bergevin who was elected for the first time as director.

Mr. and Mrs. Jim Hansen who are living at the C. N. Eaton farm while the Eatons are in Olympia were honored at a charivari Wednesday night by their family and friends.

Capt. and Mrs. Chas. Nielson are the parents of a son, Michael Allen born Jan. 25th at Fort George Wright hospital in Spokane.

Ira Chew was honored at a surprise birthday party held at the Chew home Thursday evening when 20 guests assembled to greet the honored guest. Mrs. Jess Craig provided the angel food birthday cake while the hostess was assisted by Mrs. Emma Florea and Mrs. Helia Powers.

The local Legion recently organized a basketball team that promises to give a good account of itself before the season is over. The new team is composed of Harold Roberts, Fred Ogden, Irvin Adams, Alpha Fox, Herman Taylor, Guy McLoughlin, and Joe Free.

Tying-room at the hitching racks was at a premium last Saturday. Everybody turned out in sleighs.

While C. M. Taylor was away from home a large straw stack, on his farm in Wilson Hollow, fell during a heavy wind and killed four of his finest horses.

Miss Cynthia Russell, a young lady of 27 living in Dayton, was committed to the insane asylum at Medical Lake this week. The Dayton Courier says that the chief cause for her insane condition was laid to the reading of so many trashy novels, which is one of hundreds of cases attributed to this cause.