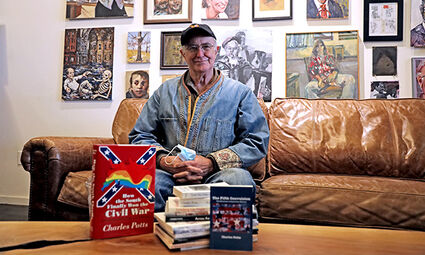 Charles Potts will be reading excerpts from his newest book, The Fifth Convulsion, at the Royal Block on February 17. The front cover artwork was done by local artist Martha Mason.

WAITSBURG-Grab a glass of wine at the Royal Block and join local author Charles Potts for a benefit book reading on February 17, 2022.

The Walla Walla based, award-winning author will share his newest book, The Fifth Convulsion: The Structure of American History and his 1993 book, How the South Finally Won the Civil War.

He has been writing and publishing since he was a teenager. Potts said that during his youth, he was reading and writing all of the time, and at one point, was living in his aunt's coal bin to avoid rent, reading two or three books a day.

Potts was a self-proclaimed Berkeley radical in the 60s and 70s and later served on the Executive Committee for the Democratic Party in Washington State. His political thoughts, combined with his profound interest in history, have influenced much of his work.

After traveling extensively, including a year in Japan and several years in Mexico, California, and Utah, Potts said his Washington home best suits him. On top of his writing, Potts owns and operates Blue Creek Appaloosas, one of a few breeding ranches for Foundation Appaloosas.

All proceeds from the February 17 reading will benefit the Weller Public Library. There is no ticket or cover charge for the event, which starts at 6:30 p.m.

To learn more about Charles Potts and his books, visit https://charlespotts.com