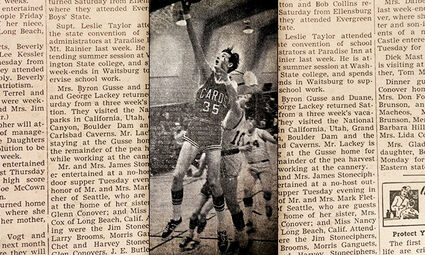 A group of Waitsburg residents wants to resurrect the town’s defunct flood control district, a prospect city officials say they welcome. “We want to keep Waitsburg safe and beautiful,” said Allison Bond, who spearheaded a recruiting effort that has yielded the required number of volunteers to serve on the district next year. “There are a lot of people willing to put the time in,” she said. “And they have great ideas.” Citing concerns about the stability of the levees along the local rivers, the ongoing risk of decertification by the U.S. Corps of Engineers, consequences for homeowners’ flood insurance premiums, and the health of salmon habitat on the Touchet River, Bond said she began talking to fellow residents and soon found a number of others who wanted to become active in a district.

When a cold air mass turned a Christmas Eve freezing rain to snow, it brought to the area what Bing Crosby always dreamed of – a White Christmas. But in the back of everyone’s minds was the all too real potential of what a beautiful blanket of frozen moisture can lead to: flood. With the warming trend and rain which arrived in Waitsburg Monday, City of Waitsburg officials have been keeping an alert eye on stream levels in the Touchet River and Coppei Creek. The warm air mass and rain which accompanied it raised the levels of both the Touchet River and Coppei Creek Monday night. The Touchet rose steadily until about midnight and has remained fairly stable into Tuesday morning.

[Photo Caption] Neil Carpenter stretches for two points against the Prescott Tigers with Ed Gerkey (10) trying to defend against the shot.

Bob Wardrip started the New Year in an auspicious style by earning for himself the coveted “W” club award, voted annually to the most inspirational player on the football squad by his teammates. Last year’s honor went to “Muff” Dunn while his brother, Bill, rated the recognition the season before that.

Capt. Fred Bachmann received his student’s certificate for flying and took his first solo flight at the Touchet Valley Airport while on leave during the holidays. Lawrence Huwe also soloed this week.

Mr. and Mrs. E. F. Dunlap accompanied by Mr. and Mrs. W. E. Bruce, drove to Mikkalo, Ore. The forepart of last week and returned home Sunday. While at Mikkalo they were the guests of Mr. Arthur Weatherford, brother of Mrs. Dunlap and Mrs. Bruce.

Under the auspices of the Attalia farm bureau a big Attalia rabbit drive is being planned for next Sunday, New Year’s Day, with F. C. Letteer in charge. The territory to be covered in the drive extends from Attalia to the Walla Walla-Columbia river gap.

Will Segraves has been very low with typhoid fever for the past week but is a little better at the present writing and hope is entertained for his recovery.

Huntsville had a union Christmas tree at the Methodist Church on Christmas eve; all the churches of that town putting their presents on one tree. It was a grand success, and the tree was literally covered with presents.

The Academy and the public school football teams played an exciting game of football on the football grounds Christmas day in which the Academy boys gained a decisive victory the score standing 10 to 0 in favor of the Academy eleven.