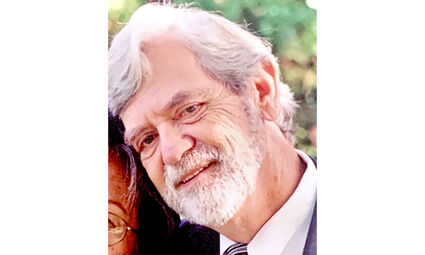 With great sadness we mourn the passing of Carroll Dean Smith, age 93, a 50-year resident of Marin County, CA. He was the third surviving son of Charles Alfred Smith and Edith Wardrip Smith of Waitsburg, W A. He was predeceased by his brothers Lloyd Henry Smith and Elmer Mayes Smith.

Carroll was born on March 29, 1928 in the family home above the train station in Bolles, WA where his father worked for a subsidiary of Union Pacific Railroad. His mother taught him to read the train schedules, igniting a lifelong love for trains and all things transportation.

Following graduation from Waitsburg High School, he worked a few jobs for railroad companies, including the Northern Pacific Terminal Company before joining the army on April 26, 1946. He was first stationed in Yokohama, where he met his future wife, Teresa (Terry) Florence Shimizu, a fellow office worker. Their son Dean was born three years later.

The United States was soon embroiled in the Korean conflict where Carroll, now a sergeant, was assigned to the Command Section at Puson Logistical Command (later called the 2nd Logistical Command). He and four others including the Brigadier General, a Colonel, the Chief of Staff, and a Lieutenant Colonel organized the efforts to maintain the Pusan Perimeter which culminated in the amphibious landing at Inchon in September 1950, and the ultimate evacuation of the US troops from the east coast of Korea. Fourteen thousand US troops disembarked in Pusan after 2 days with little food and almost no water. Carroll was promoted to Master Sergeant. He was 23 years old.

In April 1952, Carroll, Teresa and Dean sailed on the U.S. General Simon Bucher for Seattle. After the birth of daughter Jacqueline, the family moved to Ankara, Turkey where Carroll was stationed until he retired from active duty as Lieutenant Colonel. After returning to the states, Carroll continued his education at the University of Washington in Seattle and the University of California at Berkeley. He joined the California Public Utilities Commission in Los Angeles and then settled in San Anselmo to work in the San Francisco office. Following retirement, he received his J.D. from Golden Gate University. He practiced transportation law for more than 10 years.

Carroll loved to travel, visiting places near and far including Alaska, Uruguay, Russia, Turkey and Israel. He supported many causes and was an early supporter of Kohelet Yeshiva (formerly Stern Hebrew High School) in Merion Station, a suburb of Philadelphia. He enjoyed writing essays and memoirs. He authored a book, A Toast to Betty.

Following the death of his beloved wife Terry, Carroll's life was filled with family, friends, community and social justice causes.

He met a wonderful woman, Marilyn Lee Curtis, to whom he was married for 18 years. Together they volunteered at the Church of the Holy Innocents in its treasury, thrift shop and food bank. They continued traveling, enjoying walks and spending time with family. They moved to AlmaVia Assisted Living in 2019, where they regaled staff and residents with warm conversations. Marilyn passed in December 2019.

Carroll Smith was a devoted father, husband, grandfather and community member. He was generous with his love for family and friends, and he contributed to an array of charitable foundations.

In lieu of flowers, contributions may be made to Elder Care Alliance for AlmaVia in San Rafael, CA, Kohelet Yeshiva in Merion Station, PA, or Holy Innocents Episcopal Church in Corte Madera, CA.