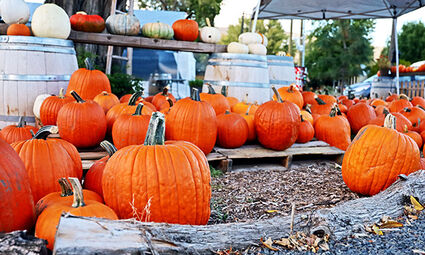 The Schulke Pumpkin Fundraiser has made its way to Waitsburg once again. Big, small, orange or blue, there's bound to be a pumpkin for you at Nancy's Dream Center, or Mr. C's Smokin' Co.

WAITSBURG-Whether you're a soup-season person or a spooky-season person, there's no arguing that autumn is here!

If you're a spooky-season person, it is time to head down to Mr. C's Smoking Co. or Nancy's Dream Garden Center. Each business received plenty of Schulke Pumpkins to go around.

The Schulke Pumpkin Fundraiser is in its fourteenth year of fundraising for the Ronald McDonald House in memory of Cooper Schulke, who passed away in 2002 after a long battle against a brain tumor.

In 2007, Cooper's siblings Emerson and Campbell came up with the idea to start a small pumpkin patch to ben...