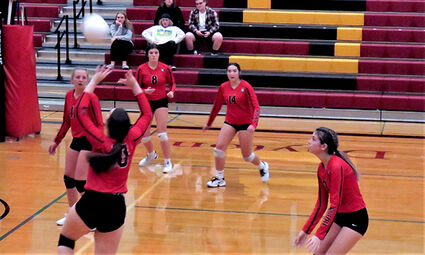 Megan Forney sets the ball to a teammate against Cle Elem on Saturday. (VA)

DAYTON/WAITSBURG-Volleyball season is in full swing for the Dayton-Waitsburg Wolfpack ladies. The season kicked off at River View High School, with the Wolfpack narrowly falling against the Panthers.

Emily Rodrick had four aces, three kills, and three assists, and Megan Forney had one ace, two blocks, six digs, and five kills. Peyton Struckmeier had a 100% serving streak for the night, four kills, one block, and eight digs.

"I am so proud of these girls. Due to a COVID shutdown, we were only able to practice with both schools together one time before t...