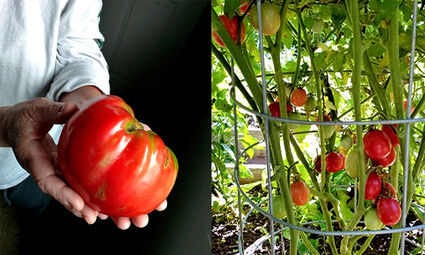 Several of The Times readers have sent in photos of their thriving tomato plant harvests to either gloat or to support Vicki after her less than stellar fruit yield this year.

When I walk through town, I see flags of all sorts waving in the wind; they celebrate with "Small Town, Big Heart," support the Cougars, Seahawks, and of course, Old Glory. Recently, I noticed a flag holder on our front porch post and deliberated joining the flag fliers. Deciding what flag to fly became a small project. Should I fly the California flag, maybe the Italian or European Union flag for Daniel, or a Go Dodgers or Lakers banner. How about designing a Weinhard Café flag so we can advertise too?

After working (bemoaning) in our garden this morning, it occurred to me that the most appropriate flag I could fly this year is the white flag of surrender. I am not usually a defeatist, but this spring, I have been brought to my soiled and dirty knees by Mother Nature. After the death of my zucchini to squash bugs, the brussels sprouts to aphids, tomato plants with only a few green tomatoes, and my mint lost to something I know not what, it's time to forget this year's crop.

People have tried to console me with: "It's been an unusual year, the early summer heatwave, no water, too much sun, not enough sun, etc."

I am now resigned that the unusual is now usual, and I may just have a very confused garden. I unexpectedly have lavender and deep purple Petunias growing in my front yard. I have never planted a petunia anywhere. I decided not to plant Morning Glories this year, but they planted themselves, are taking over my side garden, and have entangled themselves through the large Irises in the front yard.

Somehow, garlic chives have sprung up amongst the Day Lilies in the front of the house and my small Irises are still blooming! Don't they know they are spring flowers, and it's getting close to Halloween?

I did manage to grow three, yes three whole bell peppers and a bumper crop of Shishito peppers. Although this year's cucumber crops were pitiful compared to last year's bounty, we did have enough to serve in salads at the café. After I bugged Daniel to check the cucumber plant in the back garden, he found three eight-pound cucumbers. Pickles for the year!

Yesterday, Daniel was physically and mentally exhausted and needed a day to do nothing, except watch mindless television and put together some Lego projects his sister sent from Italy. I need to move, so I played tennis went to run some errands and taste some wine in Walla Walla, (for the café of course), and finished the day with some good whiskey, and conversation on a friend's patio. When I finally walked through the front door, Daniel was asleep on the couch and there was a bouquet of Lego flowers on our front table to greet me.

Thankfully, after his "day off" he was refreshed this morning. He cooked us shakshuka for breakfast, with tomato sauce I made from our meager tomato crop, our shishito peppers, cucumbers, basil and parsley. Unfortunately (or fortunately), we don't have chickens, so we had to use store bought eggs. Sitting on the deck, while enjoying our garden-based breakfast, I didn't feel defeated, but happily sated. I was especially grateful that as meager and frustrating as our garden was this summer, I didn't have to eat Lego vegetables for breakfast.