Why I must surrender my trees. 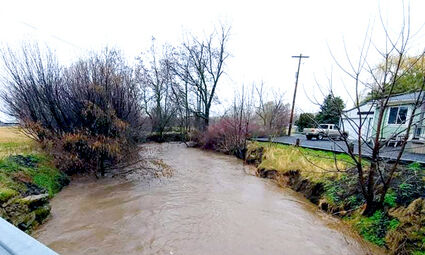 Sometime during the next few weeks, a transformation will take place on my property at the intersection of lower West Seventh Avenue and Coppei Creek. Our house faces southwest, and the driveway runs parallel to the creek. The Coppei channel is deeper here than it is most anywhere else within the city.

As far as I can see, the Seventh Avenue bridge is over fifty years old but still in solid shape (I'm not a bridge expert). According to the city, the "tee-beam" concrete structure has been scoured a bit through the years, owing to any number of things being swept downstream and piling up at the bridge during periodic high water or flood events. And due to the steep slope of the channel, we've seen two to three feet of the bank erode during the last eight years, sometimes sliding off into the creek in huge chunks, our own little landslides. Over the years, I've consulted with city and county officials about what could be done to minimize further damage, but the ways and means were never available.

Until now, but the transformation involves a trade-off. Earlier this year, our City Administrator, Randy Hinchliffe, informed me that a bridge-support and flood mitigation operation would take place this year. The plan is for riprap (variably sized large rock) to be placed along the channel from the bridge downstream, running the length of our driveway. This will create an effective dike on the channel against future erosion and protect the integrity of the bridge.

I was happy to get the news.

Randy then informed me that all the trees, shrubs, plants and other odd foliage would need to be entirely removed. Torn out. Obliterated. Destroyed. Consigned to green oblivion.

I wasn't happy to get the news.

Several years ago, we planted a series of quaking aspen at the top of the bank, along the driveway. This was the perfect solution to an ugly piece of landscape. The trees would grow quickly, providing shade from the afternoon sun, bird shelter, and a generally higher degree of feng shui to the curb appeal of our home. (I'm not a realtor or exterior designer.)

No sooner did we have the trees in the ground than the inventive and resourceful beaver found the perfect building supply. The trees were gnawed to stubs within days. (No, we hadn't thought about beavers.)

We gave up on the tree idea but were delighted when the trees grew back anyway. Later they were supplemented by volunteer black walnut, which also grew quickly.

As the photo shows, we now have a driveway lined with a tall, leafy, thriving, atmosphere-scrubbing arbor. The quail and chickadee both have found a home.

And in a week or so, it will all be gone.

I tried negotiating with Randy (whom I've known for 30 years), a bit tongue-in-cheek. I've done some stage acting, so I thought I had done an effective job protesting the destruction of our life-giving flora. I insisted that a bunch of ugly, angular rock could be strategically dumped, dropped or otherwise placed around, and in consideration of, a few trees. And I had been silly enough to believe that trees would mitigate erosion.

Not here, apparently. If my trees are the first things to drop in a flood, they'll take all the dirt with it. Or so I'm told. (I'm not a waterway engineer.)

After months of consoling myself with twinkies and letting this all sink in, I've resigned myself. Life's a trade-off, that's all. I've had my cake and eaten it, too. But I can't have a stable creek channel in front of my home and a beautiful tree-lined driveway as well. Things don't work that way in the real world.

I wonder what would happen if I chained myself to a walnut tree?