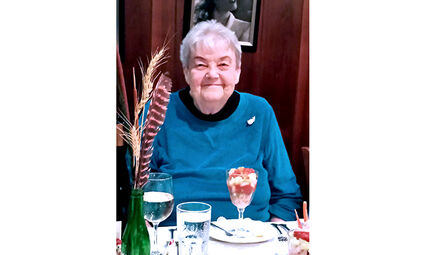 Jean Marie Kilpatrick Hinchliffe, 96, passed away on June 14, 2021. She was born near Weiser, ID to John Kilpatrick and Gertrude Hoover Kilpatrick on December 1, 1924. Jean was a daddy's girl who grew up on a large apple orchard and she LOVED apples. She graduated from Weiser High School in 1942 and earned a BS from the University of Idaho in 1946. Surrounded by many WSU Cougars, she was a proud Vandal.

While attending the U of I, Jean worked three summers at the Bozeman Canning Co in Waitsburg, WA. Following graduation, she began her career teaching Home Economics at Nampa Senior High in Nampa, ID. She married Donald Hinchliffe of Waitsburg in March of 1948. After moving to Washington State, she worked as a bank teller and at Brea Ag before serving the citizens of Waitsburg for 31 years as their City Treasurer. She also transported the precious cargo of families as a Waitsburg School District bus driver for 23 years. Jean did not like to be in the spotlight, but she liked to provide service to others behind the scenes. She especially liked being a member of DeNova Club and was a long-time member of the Order of the Eastern Star.