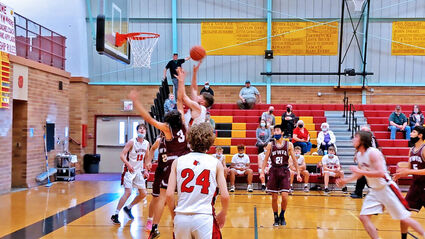 Sean Evans scores in the paint.

DAYTON-The game started out with the boys taking advantage of four Walla Walla Valley Academy turnovers in the first quarter to take the early lead in the game. From that point until halftime, it was all WWVA. Wyatt Costello's only shot in the second quarter accounted for all of DW's points in the second quarter as DW went 1-12 from the field and also missed a couple of free throws. WWVA kept swapping out players every few minutes from their bench like a hockey team and built a 29-10 halftime lead.

If you thought the game was over at that point and left at halftime you missed an incredible...