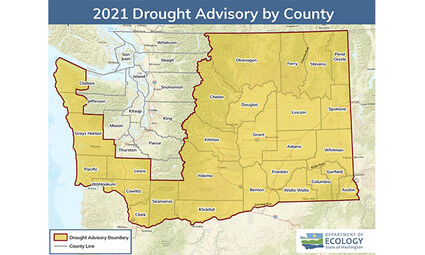 Counties included in the drought advisory as of May 27 are outlined in red.

The Department of Ecology (DOE) issued a drought advisory for most of Washington State, including Walla Walla and Columbia Counties, on May 27 following several extremely dry months.

This year, March through April was the fourth driest period for the state since 1865. Ranchers, farmers, and agriculture professionals from the affected regions have expressed growing concerns. Early crop observations show crop stress and have set an expectation for reduced yields, with wheat and hay crops being especially vulnerable.

"Critical periods for the wheat are during the second half of May and the first two weeks of June," said Washington State University (WSU) Regional Extension Agronomist Aaron Esser. "The strong winds are also dehydrating plants and taking moisture away from the soil. These windy conditions with such little precipitation are like getting a boot to the head where you're down."

Although snowpack in Washington mountains was considered "above-normal" this last winter, not all watersheds are fed by melting snow. Springtime precipitation is critical for non-irrigated crops, including wheat and barley, and grazing and foraging areas for livestock. Walla Walla County is one of the few areas in the state experiencing early snowmelt, leaving less-than-average water levels. In addition, the average temperatures in the county for May and April were significantly higher than usual.

The timing of moisture makes a significant difference for maximum growth.

The Department of Ecology noted that a drought advisory is an early warning of a possible drought.

"It promotes awareness and readiness for water users in areas where drought conditions are developing," the DOE shared in a statement. "Drought advisories are informational only and include no emergency authorizations or funding."

This is the first drought advisory issued by the DOE since the State Legislature gave the department the authority in 2020.

The DOE said that observations and photographs of drought conditions could help the department assess whether they need to elevate the state's response. Signs of drought include plant stress, erosion, reduced pasture, foraging grounds, reduced livestock weight, and lower water levels in ponds, creeks, and other bodies of water. To report drought conditions, visit https://tinyurl.com/syhpv8cd