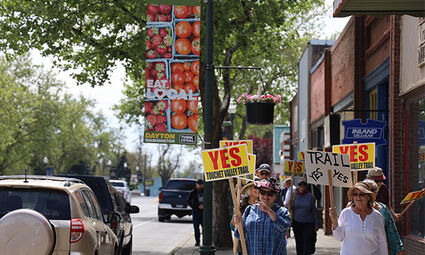 More than a dozen Touchet Valley Trail supporters made their stance known before the May 12 Port of Columbia meeting.

DAYTON-More than a dozen Touchet Valley residents hit the streets of Dayton with "YES Touchet Valley Trail" signs on Wednesday, May 12, to show their support for the project and the Port of Columbia.

"The mission is a positive opportunity for the community and expanding the valley for everybody," said Joanne Goldsmith of Dayton. Goldsmith was one of the organizers of the event.

One Dayton resident and avid cyclist, Genie Crowe, said she has two friends who have been struck by vehicles while riding alongside a highway. Both cyclists, Crowe shared, have suffered grave injuries.