The Caterpillar Chronicles: A lesson in bugs

Gracie found some caterpillars and convinced us to raise them. Unfortunately, they weren't as innocent as they seemed 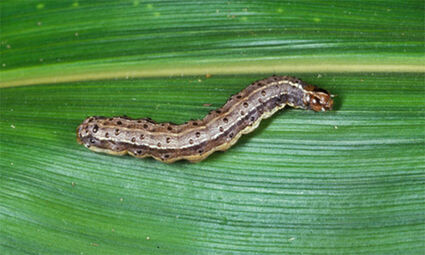 Spring is here, and yard work is in full swing! While I have a healthy respect for bees, worms, and other helpful bugs, I avoid the insect world as much as possible. As the laws of parenthood would have it, I have a three-year-old who is obsessed with bugs.

While Gracie was helping me weed out under our dogwood tree last weekend, she came across a handful of caterpillars. She insisted on raising the caterpillars, and I helped her set up little habitats for the four little critters. I decided to research a little bit about the future of her finds and discovered that they are fall armyworms.

Fall armyworms (Spodoptera frugiperda) are incredibly destructive larvae who love cereal crops but will devour everything from cotton to tomatoes to bermudagrass. They feed on more than 350 species of plants, according to the Invasive Species Compendium (CABI), and earned their name because they "march" across fields in army-like lines. If they make it through the early stages of their life, the larvae turn into fall armyworm moths; if your summer nights are anything like my family's, the small, brown and white patterned armyworm moth can be found circling porch lights, making every attempt to get into the house through the screen door.

The lifecycle of the armyworm is fairly short. Egg clusters of 100-300 eggs are laid on the lower part of leaves or brightly colored foliage and are covered in a protective layer of bristles. Golf course flags, fences and buildings, metal gutters, and, in my personal experience, window screens, are all popular nest spots.

The eggs hatch within 2-10 days (CABI said they usually hatch between three and five days). The larval stage lasts between 14 and 21 days. Larvae are typically nocturnal, which explains why they were pretty lackluster when we found them at 3:00 in the afternoon. Pupation takes place in a loose, red-colored cocoon and is wrapped up within 9-13 days. On average, adult armyworm moths live for 12-14 days but can live up to 21 days.

The larvae are easily identifiable: the worms are light green to dark brown in color, with black, longitudinal stripes. The stripes may turn brown as the larvae ages, and large larvae will develop four dots, in a square shape, on the last abdominal segment.

There are many ways to combat armyworms, thankfully, and they include everything from insecticides to natural predators. They are incredibly susceptible to parasites like flies and wasps (I guess they do have a purpose, after all). Birds, skunks, various rodents and ground beetles are all effective predators, so the local skunk should be a welcome sight if you suspect an armyworm problem.

I made the mistake of putting three armyworms in a gallon jar and, before learning about what they were, started to panic when I realized that all but one worm was gone. Apparently, not only are they destructive, they are a bit cannibalistic, as well.

After the rather horrifying education about armyworms, I have made the decision to get rid of the critters and will be researching which caterpillars Gracie can raise without harming the plant life around us. I'm leaning towards some swallowtails... any reader suggestions?