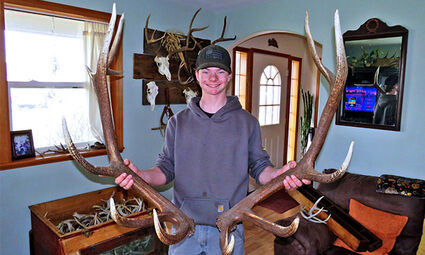 This handsome pair of matching elk antlers were found on a trip up the South Fork Touchet River in which Max had a close encounter of the third kind with a black bear.

If you had asked me about shed hunting a few weeks ago, I would have assumed we were talking about rotting pieces of pioneer carpentry that folks love to photograph or scrap out for projects. I was disabused of that notion when I learned about one of Max Schmidt's favorite forms of recreation: scouting for cast-off deer antlers, called "sheds." It turns out it's not an uncommon thing to do, but I'd never met anyone who did it until I met Max.

Dayton High School student Max Schmidt began shed hunting at 12, after a hike with his mother, Virginia. He is part of a hunting family and was lookin...