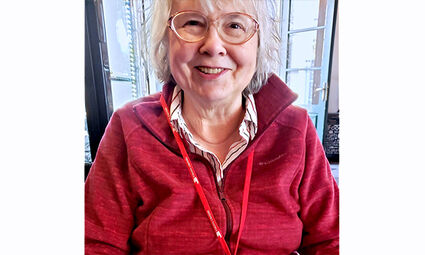 Frances Donley, 82, died March 8, 2021 in College Place, Washington. Interment will be in the Waitsburg Cemetery and at Hanalei Valley in Kauai.

Frances Eileen Donley was born April 12, 1938 in Huntsville, Washington to Clinton and Vivione Donley. Frances was the oldest of five children and attended elementary and secondary school in Waitsburg, Washington, then took classes at the University of Washington in Seattle.

Growing up on wheat farms influenced many of her activities and whenever harvest time approached, Frances and her siblings spent hours “pulling rye” from the fields accompanied by Shep, “the smartest dog ever.” Frances was active in 4-H and at the Southeastern Washington Fair, she, along with her sister, Judi, and her brother, Bill, were awarded ribbons by the 4-H Garden Club. Gardening continued to be a passion and no matter where she lived she planted and nurtured beautiful flower gardens. After she retired, Frances said her one regret was that she had not gone into landscaping as a profession.

Frances started working in her teens and kept active professionally until well after many people retire. Many of her jobs were administrative and technical, including checking calculations for routing planes at Los Angeles International Airport, setting up a self-insurance program for Golden Grain, and updating computers to prevent Y2K problems during her work at the VA Hospital in Walla Walla. She also held several roles in law enforcement, including serving as a matron in jails in the Seattle area and as a detective with the Seattle police force. One of Frances’ brushes with fame came in the 1960s when she was selected to serve as a police escort for Tom Jones when he appeared for a performance in Seattle.

How she found time is not clear, but in addition to her other hobbies, Frances was a voracious reader with interests ranging from classic fiction and history to etymology. She instilled in her children a love of reading, and a love of learning. Of all of her interests, though, the most important was travel. Frances was always going places. With her daughter, Becky, Frances traveled to China, Australia, and Europe. In 1990 she traveled to New York with the Walla Walla Choral Society to sing in Carnegie Hall. When she was 70, she jumped from an airplane.

Ms. Donley was devoted to her children and family and relocated several times to be near them. She is survived by her son, Jon Hays; daughters Rebecca Donley, Kelly Rowan, and Chellaigne Weins; her sister, Judi Annabel; brother Bill Donley; 5 grandchildren, and 1 great-grandchild. Frances is preceded in death by her daughter, Dawn Hays; her sister, Delores Jones; and her brother, Clint Donley.

Services are to be held at a later date. Friends and family can sign her online guestbook at http://www.mountainview-colonialdewitt.com

Family and friends are encouraged to sign the guest book at http://www.mountainview-colonialdewitt.com