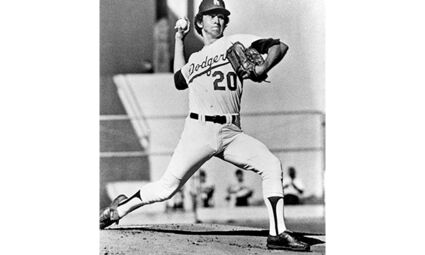 Sutton was known for his durability, never missing his turn in the rotation over 756 starts – third-most all-time behind only Cy Young and Nolan Ryan.

Don Sutton didn't make it into the Baseball Hall of Fame on his first try in 1994, but he finally made it in on his fifth try in 1998. Sutton was the only person inducted that year, with six others on that year's ballot. Tony Perez, Ron Santo, Jim Rice, Gary Carter, Bruce Sutter, and Bert Blyleven would go on to be inducted themselves in later years.

Except for his 1980 season when he led both leagues with an earned run average of 2.20, Sutton didn't have to have stand out seasons. Instead, throughout a twenty-three-year career, he kept accumulating wins. His three hundred twenty-four career wins are good for fourteenth all-time. Sutton never led the league in strikeouts, but his career total of 3,574 puts him seventh on the all-time list. The 756 games Sutton started ranks third all-time, and Sutton was also tenth all-time in shutouts ahead of fellow Hall of Famers Bob Gibson and Steve Carlton. Don Sutton still holds several Los Angeles Dodgers team records, including wins, innings pitched, shutouts and games started.

After his playing career ended in 1988, Sutton began a broadcasting career. Initially, he was covering both the Dodgers and Atlanta Braves on cable networks in 1989. Starting the following year, he became a full-time commentator for the Braves for over a decade. In later years, Sutton covered the Washington Nationals, this time for radio, before finally going back as a commentator for the Braves.

Don Sutton died on Tuesday, January 19, at his home in Rancho Mirage, Calif. He was 75.