A chat with Maude 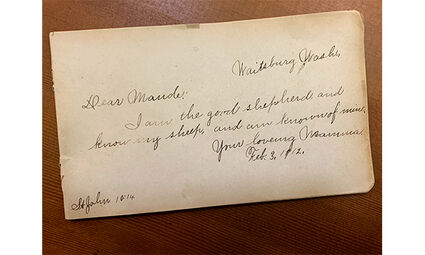 My column this week is different since my chat is with a young lady from 1912. Heather Kaas, a friend in Dayton, shared the story of how a 109-year-old autograph book from Waitsburg came into her life. "It was summer of 2019," she said. "I was working at the Weinhard Hotel before it shut down and changed hands. A couple came in, introduced themselves, and said they had old family connections in Waitsburg. Then they showed me this little paper book."

She doesn't remember their names and thought it odd that at some point in the conversation, they asked her if she would like to have it.

"It seemed a little weird, but I accepted it. I put it on the desk in the office. When we were cleaning things out later and preparing to close the hotel, I found that little book still sitting there. No one else wanted it, so I took it home."

Well, it's not every day you get offered a little piece of history, one as rare and in as good a condition as this humble little book. Leather or paperbound, ornate or simple, sentimental and humorous versions of autograph books have been around for generations. This simple home version measures 4.5 x 7.5 inches, it is missing its cover, and the heavier than newsprint paper is bound with staples. There's nothing fancy about it. I imagine booklets like these may have been put together at the original Waitsburg Times office on Main Street.

It turns out that collecting notes and messages in this way was a common thing to do in that era. Not only did our ancestors not have email, texting apps, or social media most did not have telephones. These autograph books were valued keepsakes after students graduated from school and moved on. After high schools began publishing yearbooks, students collected autographs and messages at the end of the school year on the annual's pages. However, early autograph books were often started in school and continued to be passed around to friends and family for years after graduation.

In this little autograph book, there are a total of 21 handwritten notes addressed to a young lady named "Maude." Each dated message, written with fountain pen or pencil, span the years 1912-1923. Having done some of my own research on historic Waitsburg over the years, it is fun to conjure up a chat with Maude on an interesting topic or two. I have questions for her about what is written on these little pages.

A bit of preliminary sleuthing turned up the burial record of a Maude H. Brown (nee Baim) at Mountain View Cemetery in Walla Walla, alongside her husband, Homer J. Brown. Maude is recorded as having been born in 1898 and Homer in 1893. Records also show that Homer and Maude were married in 1919.

Another clue that this is the same Maude is a penciled note from a certain young man in her book:

Sailing down the stream of life in your little birch bark canoe.

May you have a pleasant journey, with just room enough for two.

The question I would like to ask Maude first, "Was this indeed your future husband?"

Here is a note by one of Maude's friends:

I wish you friends in store.

I you [sic] a crown when you are dead, what can I wish you more!

Your friend and schoolmate,

Like the message from Virginia, an awareness of mortality is expressed in other messages as well.

When in a silent grave I sleep, and over me the willows weep

'Tis then Dear Friend and not before, That I shall think of you no more

These sorts of messages might seem morbid; but again, it's helpful to keep in mind that death was a common companion to people of that era, who did not enjoy the advances in medicine we do today. In 1912 the Titanic sank. In 1916 America entered World War I. In 1918 the "Spanish Flu" began to rage around the world, killing some 50 million people worldwide and over 670,000 in the U.S., according to the CDC.

Some of the book's signatures would be recognizable to anyone familiar with Waitsburg's long history - names such as Mock, Hooker, Keiser, and Franklin.

A notable signer in the notebook Friedrich H. Oeblschlegel, quoted from the poem "The Present Crisis" by James Russell Lowell, a fervent 19th-century American abolitionist. The lines seem an apt quote for our time:

Strive you upward e'er and onward

Would you keep abreast of truth."

Some of Maude's friends left whimsical and creative notes:

"When you are sitting on the sofa, with your sweetheart by your side,

Just beware of invitation for his mustache may be tried," - Kittie Miller

Remember me when you are far off, Where the woodchucks die of Whopping [sic] cough. - Hubbie Wilde

When you get married and your husband is cross, just pick up the broomstick and say "whose [sic] boss." - Elsie Hooker (who wrote two notes in the book)

All of the 21 messages written to Maude in her book were written in 1912 or 1913, except for the last three. Maude, what happened between 1913-1917? Born in 1898, you would have graduated high school around 1916. Had you put it away as a childhood activity, bringing it back as you saw your life and town change.

Did you watch as the Methodist Church and Christian Church in Waitsburg were built on Main Street? Did your future husband join the war effort? Were you not finished collecting memories and added the last three before you married and started a family?

Perhaps the answer is hidden in the last messages she collected, including this most enigmatic note:

Memories of May 20th and a few days later

Sadly, Maude cannot answer my questions directly. If you know more of her story, are related, or knew her family, please contact me at The Times by emailing me at editor@waitsburgtimes.com.