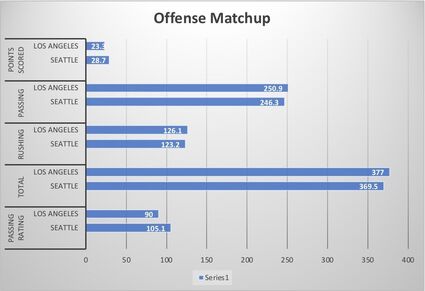 This week Seattle hosts the Los Angeles Rams in what will be their third matchup this season. Seattle lost the first game in Los Angeles 23-16 in a game that Russell Wilson had two interceptions and a fumble but no touchdowns. Seattle won the rematch in Seattle 20-9 behind Wilson’s two touchdowns, one throwing, one rushing. The biggest question coming into this game is who will be the starting quarterback for the Rams. Jared Goff or John Wolford?

Jared Goff had surgery to stabilize a broken right thumb and didn’t play against the Cardinals last week. Filling for Goff was John Wolford, who managed to lead the Rams to an 18-7 win over the Cardinals. Though one could argue the game’s biggest play was an interception by the Rams defense that was returned for a touchdown just before halftime. It was Wolford’s first game as an NFL quarterback, and he went 22-38 for two hundred thirty-one yards and one interception.

The Rams primary rusher Cam Akers played through an ankle sprain last week but was not very effective, gaining only thirty-four yards on twenty-one carries. If Akers is not at full strength, the Rams have other options in Darrell Henderson Jr. and Malcolm Brown, who have both had over one hundred attempts and each averaging over four yards per carry.

Former Eastern Washington standout Cooper Kupp was out last week and was placed on the reserve/COVID-19 list. Kupp is the Rams leading receiver this year with nine hundred and seventy-four yards and ninety-two catches. His status for this game is unknown.

Defensively the Rams feature the best defense in the NFL this year. They ranked first in total yards allowed per game with 281.9 and first in points allowed per game at 18.5. Seattle’s defense has vastly improved over the last four weeks. They have been giving up an average of 12.5 points per game over that span. Safety Jamal Adams had a shoulder injury against the 49ers last week but is believed to be available this week against the Rams. The players listed as out for this week for Seattle are as follows: Jayson Stanley CB, Greg Olsen TE, Mike Iupati G, Deejay Dallas RB, Carlos Hyde RB.

DK Metcalf ended the regular season with 1,303 yards receiving, which is now the new Seahawks team record for receiving yards in a single season. The old record of 1287 yards was held by Steve Largent in 1985. Tyler Lockett also broke a team record with 100 receptions on the season. Doug Baldwin and Bobby Engram shared the old record of 94 receptions.